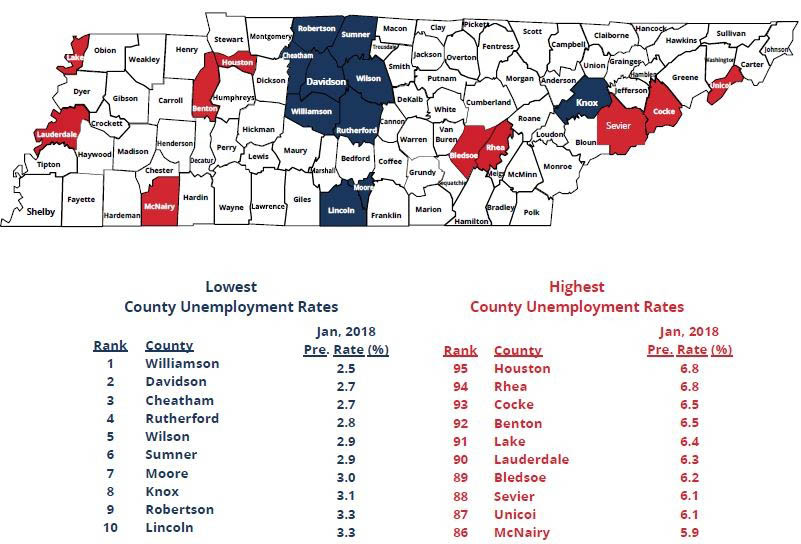 Nashville, TN – The Tennessee Department of Labor and Workforce Development (TDLWD) have released county unemployment statistics for January 2018.  A vast majority of the state’s 95 counties continue to record unemployment rates under 5 percent and every county’s rate was lower than it was in January 2017. 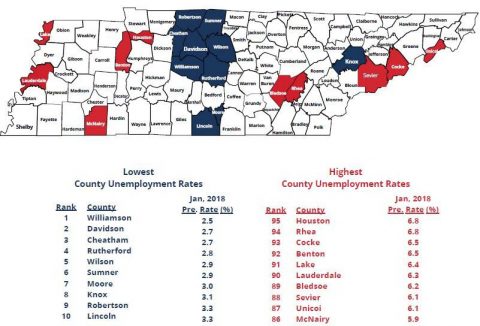 Williamson County continued to have Tennessee’s lowest unemployment rate at 2.5 percent, which is a 0.3 percent increase from December.

“Because of seasonal employment trends, Tennessee typically sees a slight uptick in county unemployment at the start of the year,” explained TDLWD Commissioner Burns Phillips.  “But the year-to-year comparison of statistics shows just how well the state is doing when it comes to job creation.”

Many counties saw a decrease of 2 percent or more in year-to-year comparisons.  Two counties once again stand out when comparing unemployment statistics from January 2018 to January 2017.

Lake County in West Tennessee has also experienced significant job growth over the last year.  Last January the county had an unemployment rate of 10.1 percent.  During January 2018 the county recorded a rate of 6.4 percent, a difference of 3.7 percentage points.

“This is a great example of how Tennessee’s economy is not only strong in its metropolitan areas, but it is also doing well in many of the state’s more rural counties,” Commissioner Phillips said.

The statewide unemployment rate is seasonally adjusted, while county rates are not.  Seasonal adjustment is a statistical technique that eliminates the influences of weather, holidays, the opening and closing of schools and other recurring seasonal events from an economic time series.

A complete analysis of the January 2018 county unemployment rates can be found here.  Additional information on labor statistics can be found on the state’s workforce website, Jobs4TN.gov.