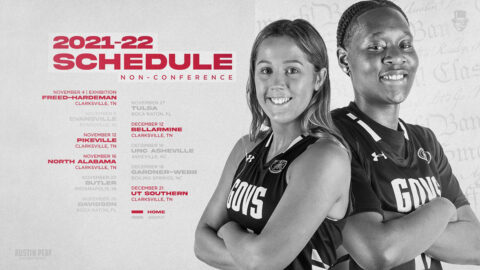 The Governors will play 13 home games this season, including nine OVC tilts in the Winfield Dunn Center.

“One of our initial tasks was working to complete the 2021-22 schedule,” said Young. “Being able to compete on the road in six of our ten nonconference contests will help prepare our team for the rigors of the Ohio Valley Conference. We are now looking forward to establishing a normal routine as we await the start of the season.”

After an exhibition against Freed-Hardeman (November 4th), the Governors open the season at Evansville, November 9th. Austin Peay State University has won back-to-back season openers, including an 88-78 win at North Alabama last season, and will look to win its third-straight season opener for the first time since a five-game winning streak from 1983-84 to 1987-88.

The home opener is next on the schedule, as Young makes her Dunn Center debut when Austin Peay State University hosts Pikeville (November 12th). The APSU Govs have won four-consecutive home openers and will look to match the five-game home opener winning streak from 2000-01 to 2004-05 for the longest in program history. The Governors then welcome North Alabama (November 16th) to Clarksville before departing for a three-game road trip.

Austin Peay State University’s longest road trip of the season begins with a stop at historic Hinkle Fieldhouse in Indianapolis to square off with the Butler (November 20th). ­­The Governors then journey to Boca Raton, Florida for the FAU Invitational where they will take on Davidson (November 26th) and Tulsa (November 27th).

The Govs return to the Dunn Center to host Bellarmine (December 12th) before traveling to the Tar Heel State to play at UNC Asheville (December 16th) and Gardner Webb (December 18th). Austin Peay State University then returns to Clarksville to wrap up nonconference play when they host newly-minted UT Southern (December 21st).

After taking a couple days off for Christmas, the Governors kick off the OVC docket against UT Martin (December 30th) in the Dunn Center. After a trip to Cape Girardeau, Missouri to play Southeast Missouri on New Year’s Day, the APSU Govs will be back in Clarksville for contests against SIU Edwardsville (January 6th) and Morehead State (January 8th).

Austin Peay State University also will play a pair of games against Murray State, with the Racers coming to the Dunn Center, February 3rd, and the Governors traveling to the CFSB Center, February 17th. The APSU Govs have won four straight contests against Murray State, which is their longest winning streak in the series since they won eight straight games from 2009 to 2012.

For the fifth consecutive season, the Ford Center in Evansville, Indiana hosts OVC Women’s Basketball Championship (March 2nd-5th). The APSU Govs have made seven straight OVC Tournament appearances and an eighth would make Young the sixth coach in program history to lead the team to the conference tournament in her first season at the helm.

Below is a brief summation of Austin Peay State University’s nonconference schedule. For news and updates on everything APSU women’s basketball, follow along on Twitter (@GovsWBB) and check back at LetsGoPeay.com.