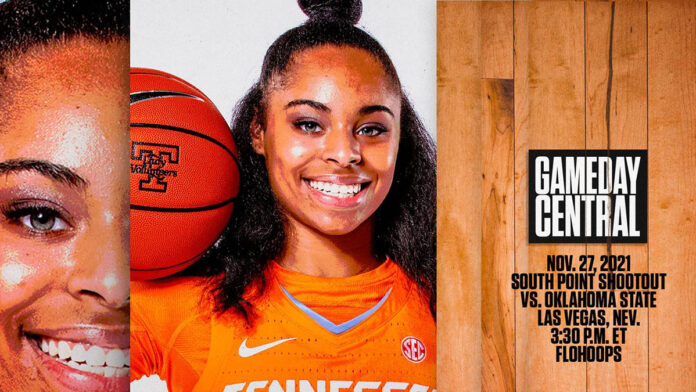 The game marks the third straight battle against a Big 12 foe, as the Lady Vols toppled No. 12/21 Texas in overtime, 74-70, on Sunday afternoon in Knoxville and then defeated Kansas, 68-58, on Friday in Las Vegas.

This is the second-ever trip for the Lady Vols to “Sin City,” with their only other Vegas visit coming during the 1979-80 season on December 18th and 19th vs. Long Beach State and UNLV at the Nike Tournament of Champions.

OSU will mark the first game this season where Tennessee doesn’t have to face a team with a loss. UT’s previous five opponents had combined for a 10-0 mark prior to meeting the Big Orange.

UT overcame some shooting struggles at times and continued to play stingy defense to top Kansas, 68-58, on Friday and remain unbeaten. KU had come into the contest shooting 50.2 from the field, 42.9 on threes, and 75.9 from the free-throw line, and suffered through efforts of 30.8, 30.0, and 66.7, respectively, vs. Tennessee.

Oklahoma State dug itself an 18-point hole vs. Green Bay on Friday, and its second-half rally came up short in a 57-54 loss.

Trey Bender (play-by-play) will be on the call Saturday for the FloHoops live stream (subscription required) from the South Point Shootout in Las Vegas.


A link to the live audio stream can be found on each game’s Hoops Central page or the Lady Vol schedule on UTSports.com.

Tennessee senior guard/forward Rae Burrell, who is currently sidelined by an injury, hails from Las Vegas and graduated from Liberty High School.

Looking Back AT The Last Game

No. 11/10 Tennessee picked up its fifth straight win to start the 2021-22 campaign on Friday, defeating Kansas at the South Point Thanksgiving Shootout in Las Vegas, 68-58.

Tennessee (5-0) was led by junior Jordan Horston, who turned in a double-double with 14 points and 11 rebounds, while graduate Keyen Green and sophomore Tess Darby each tallied 11 and graduate Jordan Walker added 10.

Holly Kersgieter was the top scorer for KU (4-1), knocking down a season-high 19 points and collecting eight rebounds.

UT pushed its lead to double digits on a couple of occasions, but Kansas wouldn’t go away. The Lady Vols held off the Jayhawks, though, with a game-high 21 points in the final period.

Tennessee’s defense and rebounding continued to be its strong points, as the Big Orange held a strong-shooting KU lineup to only 30.8 percent from the field and out-rebounded the Jayhawks, 55-38. UT tallied 19 second-change points and had 32 of its 68 points in the paint.

Notables From Our Last Game

Doling Out Losses
Like the rest of UT’s opponents thus far, Kansas entered the match undefeated on the season. Tennessee’s opponents have faced UT with a combined record of 10-0 before all suffering their first loss of the season.

Darby Breakout
Sophomore Tess Darby tied her career-high of eight points in the first half against Kansas, going on to score a career-best 11 points while shooting 4-of-8 from the field and 3-of-6 from behind the arc.

Hot Start Horston
Junior Jordan Horston followed up a career-high 28 points and 15 rebounds against #12/21 Texas with her third double-double of the season against Kansas, notching 14 points and 11 rebounds. She’s currently averaging a double-double on the season at 20.0 ppg. and 11.5 rpg. and has paced UT in scoring in each of the past four contests.

Battle Of The Bench
Tennessee’s bench turned in a season-best 21 points on the night, while KU only got 10 from its reserves. It’s the fourth time this season UT’s bench has outscored its opponents. Through five games, Tennessee is averaging 14.8 points off the bench per game.

Tennessee has started a season 5-0 for the fourth time in five years and the ninth time in the past 15 seasons. It will attempt to improve to 6-0 for the fifth occasion in 10 campaigns and the eighth in 15. The best opening of the Kellie Harper UT era here was 7-0 in 2019-20.

The Lady Vols posted their most bench points with 21 vs. Kansas on Friday.

UT has posted three straight highs for fast break points, generating 14 vs. the Jayhawks in the last game.

The Big Orange women are 11-4 in games decided by five points or fewer.

Tennessee is up to No. 16 nationally in field goal percentage defense, a stat that Kellie Harper teams are known for. UT is allowing opponents only 30.7 percent from the field through five games.

Following her career-high 14-point effort vs. Kansas, Jordan Horston has scored in double figures in eight of her last nine games, including four of the last five contests in 2020-21 and all four in 2021-22.

Horston has three double-doubles in four outings in 2021-22, ranking second among SEC players.

Alexus Dye leads the SEC among active players with 33 career double-doubles, including one this year.

Horston’s 28 points vs. Texas stands as the highest scoring total this season by an SEC player.

The Lady Vols rank No. 5 in home attendance average at 7,143 after welcoming the nation’s number two crowd this season with 9,460 on hand for the Texas game.

The Lady Vols and Cowgirls last played on December 2nd, 2018, when a No. 11/11 UT squad went into Gallagher-Iba Arena in Stillwater and emerged with a 76-63 victory, improving to 6-0 on the season. UT will try to match that season-opening record on Saturday afternoon.

Rae Burrell is the only member of the current Tennessee team who was on the roster the last time these programs faced off. She saw nine minutes of action and scored four points while grabbing five rebounds and adding an assist as UT overcame a 43-40 halftime deficit with a 21-5 third-quarter blitz.

This marks Kellie Harper‘s third meeting with Oklahoma State as a head coach but her first while leading the Lady Volunteers.

About The Oklahoma State Cowgirls

Oklahoma State comes into the game with a 3-2 record after falling to Green Bay, claiming victories over SMU, Missouri State and Rice after opening the year with a setback vs. Colorado.

The Cowgirls finished 19-9 overall and 13-5 in the Big 12 a year ago, placing second in the league standings and advancing to the NCAA Second Round. They return three starters and 11 total letterwinners from that squad.

Lauren Fields is the only OSU player scoring in double figures, putting up 12.8 per outing. She also leads the team in steals with 12.

Through five games, Oklahoma State is holding opponents to only 50.0 points per contest, and has not allowed any team to score more than 57 points in a contest.

Jim Littell is in his 11th season leading Oklahoma State and his 31st year overall as a head coach, compiling records of 198-121 and 711-222, respectively.

Littell has twice been named BIg 12 Conference Coach of the Year, including last season.

He guided the Cowgirls to a second-place league finish a year ago and to the sixth NCAA appearance under his watch.

Oklahoma State’s women’s basketball team could not overcome a 16-point halftime deficit on its way to a 57-54 loss to Green Bay on Friday afternoon at the South Point Shootout.

The loss snapped OSU’s three-game winning streak and dropped the Cowgirls to 3-2 on the year.

N’Yah Boyd was one of three Cowgirls to finish in double digits with 13 points. Lauren Fields and Neferatali Notoa each added 11 apiece in the contest, while Fields pulled down a game-high nine rebounds.

Oklahoma State trailed 18-8 after the first period and took a 33-17 deficit into the locker room before storming back in the second half.  The Cowgirls outscored Green Bay 15-8 in the third frame and had a 22-16 advantage in the final stanza to come up three points short.

OSU turned the ball over 17 times, but it forced the Phoenix into 24 miscues

The Cowgirls gathered up 20 offensive boards, resulting in a 14-1 edge in second-chance points.

Six Of Seven At  Home In December

After facing Kansas and Oklahoma State, the Tennessee women’s basketball team will enter a stretch where it plays six of seven games at home during the month of December.

The first assignment will be Tennessee Tech in Knoxville on December 1st (5:30pm ET/SECN+), followed by Virginia Tech on the road on December 5th (2:00pm CT/ACC Network).