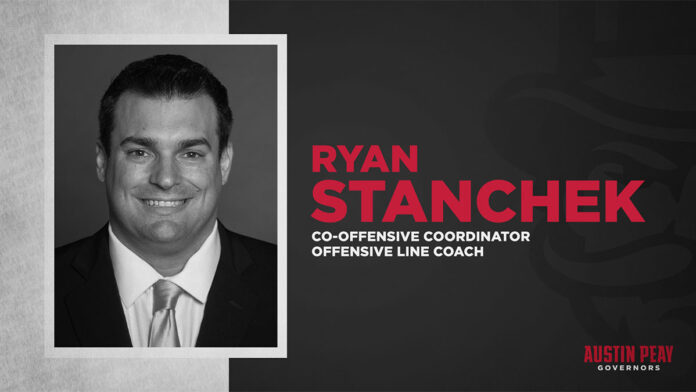 Ryan Stanchek joins the coaching staff as co-offensive coordinator and offensive line coach with Robbie Matos taking over as the Governors director of football operations and chief of staff.

Stanchek joins the APSU Governors after serving as co-offensive coordinator and offensive line coach at Florida A&M in 2021 and replaces Josh Cochran who departed to become tight ends coach at Texas Tech. Matos comes to Clarksville after serving on the Kent State support staff the past two seasons and replaces Wes Turner who left to pursue other professional opportunities.

While at Florida A&M, Stanchek was a member of a staff that led the Rattlers to a FCS Playoff appearance for the first time since 2001. Florida A&M’s offense ranked among the FCS Top 50 in total offense (44th, 380.9 yards per game), rushing offense (41st, 159.2 ypg), and scoring offense (47th, 27.8 points per game). The Rattlers offensive line allowed the 17th fewest sacks (1.25 per game). Running back Bishop Bennett and offensive lineman Keenan Forbes earned First Team All-SWAC after the 2021 season with offensive lineman Jay Jackson nabbing second team honors.

In two seasons at Southern Miss, Stanchek guided an offensive line unit that saw four members named to the All-Conference USA teams during his tenure Drake Dorbeck was a 2020 Second Team All-CUSA selection and also was selected the top collegiate offensive lineman in the state of Mississippi. In addition, Coker Wright earned 2020 C-USA All-Freshman team recognition.

“I was fortunate enough to work with Ryan at Southern Miss and was not only really impressed with his knowledge of the game but more importantly the relationships with his players,” said Walden. “They would run through a brick wall for him. Ryan has been at the highest level of football being a 2 time all American at West Virginia and getting a brief stint with the Atlanta Falcons in the NFL. Ryan is going to bring chip on your shoulder blue collar attitude to our OL room. We are thrilled to have him, his wife Jessica, and their two children Skyler and Bella join our family.”

Prior to joining the USM staff, Stanchek was a member of the Alcorn State coaching staff for five seasons (2014-18), beginning as an offensive line coach before earning a promotion to run-game coordinator in 2016 and ultimately offensive coordinator for the 2018 season. The Braves won the Southwestern Athletic Conference’s East Division title each of his five seasons. In 2018, Alcorn State won the SWAC Championship and played in the Celebration Bowl with quarterback Noah Johnson earning SWAC Offensive Player of the Year honors and running back De’Shawn Waller picking up SWAC Newcomer of the Year.

A two-time All-America as an offensive lineman at West Virginia (2005-08), Stanchek started 48 consecutive games in Morgantown. He helped the Mountaineers win four bowl games in four years, including the 2006 Sugar Bowl and 2008 Fiesta Bowl, and Big East Conference titles twice (2005 and 2007). Stanchek was also awarded the Red Brown Cup at WVU which went to the school’s Male Student-Athlete of the Year based on athletic, academic, and civil achievement.

A Cincinnati native, Stanchek earned his bachelor’s degree in physical education from West Virginia and was a three-time Big East Academic All-Star. He signed with the Atlanta Falcons as an undrafted free agent and played with the Arena Football League’s Cleveland Gladiators in 2010. Stanchek began his coaching career as an as offensive quality control assistant at Florida State (2010) and as a graduate assistant at Indiana (2011-13).

Matos joins the Austin Peay State University football staff after earning his master’s degree in sports administration at Kent State in December 2020 where he was the graduate assistant for the football operations staff the past two seasons. He earned his bachelor’s degree in sports administration from Kent State and was a student assistant for the Golden Flashes as an undergrad.


“Robbie comes to us from Kent State where he was highly regarded by head coach Sean Lewis,” said Walden. “Robbie is very organized and detailed oriented in all that he does and possesses great communication skills. He will be instrumental in keeping our players informed of their daily routine and schedule and also will play a vital role in planning our travel, recruiting trips and visits. I am fired up to have him a part of our staff.”