Clarksville, TN – It’s a classic story: a city boy falls in love with a country girl and moves her to the big city in California. But this story is a little more… magical. Jeff Bornstein was born and raised in California before he met Kimberly online in 2008.

Ever since they have been making a name for themselves within the magical entertainment world.

You would not know it just by looking at him, but Jeff is one of the most sought out sleight-of-hand artists in the country, and his wife’s mentalism skills are just as impressive.

Kimberly can be blindfolded on stage and connect with audience members she has never met. She can also pluck thoughts from even the most sophisticated minds. Together, they make a dynamic duo that performs magic and mind-reading, with a splash of comedy.

Jeff is an Army veteran and former Hollywood stuntman; some of his credits include The Specialist, Lethal Weapon III and Star Trek VI. While overseas during his time in the Army, the USO sent out the cast from the hit television show Happy Days to entertain soldiers. He knew then that he wanted to give back in that same way.

When the opportunity arose, Jeff jumped at the chance to take his magic on tour with “Comics on Duty.” He and five other comics traveled to the Middle East to entertain troops during Operation Iraqi Freedom, where he performed 32 shows in 23 days. From there, he and Kimberly created a show that they offer to the U.S. Armed Forces.


“Operation Bravo is a unique opportunity to give back to the troops in a way that is very personal to me,” Jeff Bornstein says. “It means so much to be able to provide some relief, even if only temporary, to the men and women serving our country.”

More recently, the couple showed off their skills at the world-famous Magic Castle in Los Angeles and were featured on the television series Masters of Illusion. But the California lifestyle started to wear on the couple, and during the pandemic, they began looking for a change. In January 2021, they moved to Clarksville and quickly made themselves at home.

“We love it here. Sometimes when we’re driving, we catch ourselves in awe that we’re in Tennessee,” says Kimberly. “Everyone has been so friendly and wonderful.” The Bornsteins have done some performing at House of Cards in Nashville since they moved here, but now they are eager to stage their larger show for their new hometown.


“Jeff and Kimberly have created Magic of the Mind, a show that’s going to exceed your expectations,” says Customs House Museum & Cultural Center Executive Director Frank Lott. “Their magic and mind-reading are fascinating, and I’m thrilled to get them on our stage so we can share their craft with more people in our area.” 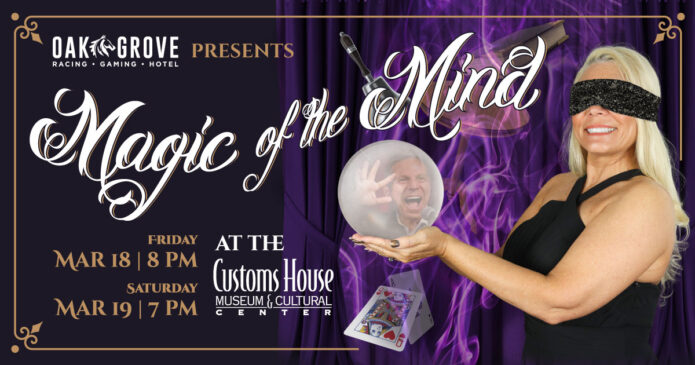 You can see the couple live at the Customs House Museum and Cultural Center for Magic of the Mind, a never-seen-before comedy, magic, and mind-reading show starring Jeff & Kimberly. The two shows are sponsored by Oak Grove Racing, Gaming & Hotel.

Performances are scheduled for Friday, March 18th at 8:00pm and Saturday, March 19th at 7:00pm. Shows are for ages 14+ and general admission tickets are on sale now for $25.00 at customshousemuseum.org.

About the Customs House Museum

Located in the heart of historic downtown Clarksville, Tennessee, the Customs House Museum and Cultural Center is the State’s second largest general museum. The original portion of the building was constructed in 1898 as a U.S. Post Office and Customs House for the flourishing tobacco trade. Incorporating a number of architectural styles, the original structure is one of the most photographed buildings in the region.

With over 35,000 square feet of the region’s best hands-on activities and special events…people of all ages agree – the Customs House Museum is well worth the stop!

The Explorer’s Gallery is packed with fun, learning and fantasy in Aunt Alice’s Attic, McGregor’s Market and kitchen, and of course – the Bubble Cave! Finally, get “all aboard” to see our fantastic model trains. Our volunteer engineers “ride the rails” every Sunday afternoon from 1:00pm to 4:00pm.

The Customs House Museum is located at 200 South Second Street. For more information, call 931.648.5780 or visit their website at www.customshousemuseum.org