Montgomery County, TN – Billy McCraw has found himself in the spotlight recently, after he, at the same time as everyone else, discovered there were plans to take his house and part of his strawberry ranch for the proposed  Rossview Road widening project.

He took time to share his thoughts on the subject, as he, like the rest of Clarksville-Montgomery County, eagerly awaits news as to how this situation can be resolved, fairly.

“I bought this farm when I was fourteen years old,” McCraw said. “When other kids were opening their Christmas presents, I was down at the barn milking cows at my family’s dairy. I’ve owned this 125 acres, formerly known as the Red River Sheep Farm for more than sixty years now. I bought it at public auction from First National Bank.”

Like many in this community, McCraw did double duty, farming, while at the same time pursuing a career.

“I milked cows for thirty years,” McCraw said. “We’ve raised tobacco, corn, and soybeans, like everyone else. Forty years ago I went to South Dakota and married a girl named Teresa. Since then, she has driven a school bus for CMCSS, and I’ve been a commercial builder, working all over the country.”

Projects to McCraw’s credit include schools in the Bowling Green Kentucky area, as well as parts of the Corvette Museum. Locally, he worked on Governor’s Square Mall, the Clarksville Street Department complex, parts of the Clarksville-Montgomery County Public Library, and other major projects.

Over the years, he also built additions to that little farmhouse that came with the 125 acres.

McCraw and his wife Teresa are proud of the home, family, and strawberry business they’ve built over the last several decades, and have ideas for their legacy.

“We want to pass it down to our kids and grandkids,” McCraw said. “Teresa and I have two children together, Logan and Chloe Ann McCraw, and I have two daughters Patricia and Cindy. We have seven grandchildren. We get offers every week, but this property is not for sale.

“One week ago, we went to an open meeting. They invited anyone who was interested in learning about what was going to happen with the widening of Rossview Road. We were there, and a neighbor sat down beside me. She said, I’m sorry to see they’re going to take your house and part of your strawberry ranch’, and I said, do what?!


“They had the blueprints laid out. I went over to look, and sure enough, you could have knocked me over with a feather. I ain’t gonna lie. I was mad.”

McCraw shared some of the history of how it all got to this point.

“Moore Construction owns the land across the street from me,” McCraw said. “Two years ago, in February, I was down at the greenhouse and two men from the school system came to see us. CMCSS’s Chief Operations Officer Jim Sumrell and another man. They said they wanted to buy eighty acres for new schools. The man with Sumrell said there would be a two-lane road in and out, as well as a 1-lane road for school buses. Then he said, ‘one of those roads will be right where your house and your greenhouse are sitting’.

“I said, I bought this farm when I was fourteen years old and I’m planning on dying here. The other man said, ‘well, you can die somewhere else.’ Just the way he said it, you can’t believe how angry I was. They said, we’ll give you a week to think about it, and I said, I don’t need a week.”

They did come back a week later, at which time McCraw offered them a chance to buy some other land that he owned on Kirkwood road.

“That land on Kirkwood is level as a table-top,” McCraw said. “They wanted 76 acres. They fell in love with it. Gas, water, and sewer were about 35 feet from the property line.

“A few weeks later they invited us down to the bus garage complex. Sumrell, this other man, the mayor, and some others were there. They offered me $20,000 an acre for it, and some other deal points. We didn’t say anything. We walked out and went home to think about it. A few days later we made a counter-offer. Next thing we know, they’ve bought the land across from us, from Moore Construction Co. The deal was, Moore Construction got the right to put in all the pipeline, gas, water, and sewer. There is no telling how much money they’ve spent on that project the last couple of years.”

The McCraws went back to business as usual, not knowing how they might be affected by the pending development. In recent years,  McCraw’s Strawberry Ranch has become a popular Springtime destination for families throughout Middle Tennessee.


“We’ve had the strawberry farm up and running for about thirteen years now,” McCraw said. “The first year we had 22,000 plants, the next year we had 35,000. This year, we’ve got about 100,000 plants on nine acres. Some days we’ll have 150 customers, other days 300. On the weekends we average 500 – 800 people. Generally, the season lasts from the last week of April through all of May and the first part of June. Strawberries don’t like the heat.”

The popularity of McCraw’s Strawberry Ranch is part of the reason this issue has gotten so much attention, and the family has gotten so much community support. At a recent County Commission meeting, the galley was filled with McCraw supporters as he spent three minutes at the podium, pleading with the powers that be to spare his house, business, fence, and trees.

“The neighbors think like I do,” McCraw said. “It’s damn near a crime, what they’re doing to us. The thing is, they could take land on the other side of the road. We live on a hill. Two weeks ago the city gas department started putting in gas lines across the street. They were putting them fifteen feet deep. I went over and asked why. He said they’re going to cut the road down eight feet. That’s the first I’ve heard of that. When they do that, they’ll have to slope the bank back from the road. That’s what will take our house, and our 150-year-old oak tree.

“Across the road, there is nothing, no buildings, fences, trees, nothing. All they have to do is put this on that side of the road. It would be cheaper for the county to buy land than to replace our house, our trees, and 1,500 feet of our fence. The fence alone would cost $50,000 to replace. They could save countless thousands of dollars just by going across the street.”

The good news is that the McCraws are now being presented with some alternative ideas. A retaining wall and the relocation of a driveway is something that would possibly be acceptable to Billy and Teresa.

“We talked about a retaining wall, that way they wouldn’t have to take our fence, trees, and house,” McCraw said. If they moved the driveway farther down the hill, we could live with that. We’re waiting to hear back. I just don’t want to lose my house, my trees, and my fence.


“It seems like they would have approached us and talked with us before they made decisions about our house. They’re saying they’ve spent so much money on the drawings that they just don’t want to rework them.”

“Now, at least they act like they’re concerned, but that’s probably only because so many people have raised hell about this proposal. So many people have come forward, I think 34,000 people have viewed this situation just on our Facebook page. Honestly, I didn’t know I had so many friends.

The McCraws understand the procedures and processes involved and have been very gracious in their response, and in their willingness to find alternative solutions


“My preference is for them to move it across the street, or put a retaining wall over on this side so I can save what’s mine,” McCraw said. “We’ll work with them. Last Friday I got a call, and they finally opened up about their plan to take my property. Their explanation was that they would take it all, reshape the area next to the road creating a slope, and then give it back to us. What would we do with a sloped bank, after everything I’ve worked a lifetime for is gone?”

McCraw says his property’s road frontage that would be affected consists of about 2,500 ft on one side of the house and about 1,000 ft on the other side.

The proposal now includes filling about fifty feet back from the edge of the existing highway and putting surge rock in McCraw’s pond, reducing its size. That’s the pond he uses to irrigate his strawberries.

“We’ve heard from the people of this community, and they’re getting tired of the way developers are running over us, and how the county seems to just be letting them do it,” McCraw said. “They talk like they’re going to work on it, and get it changed this week, but I just don’t know. We’ll see.” 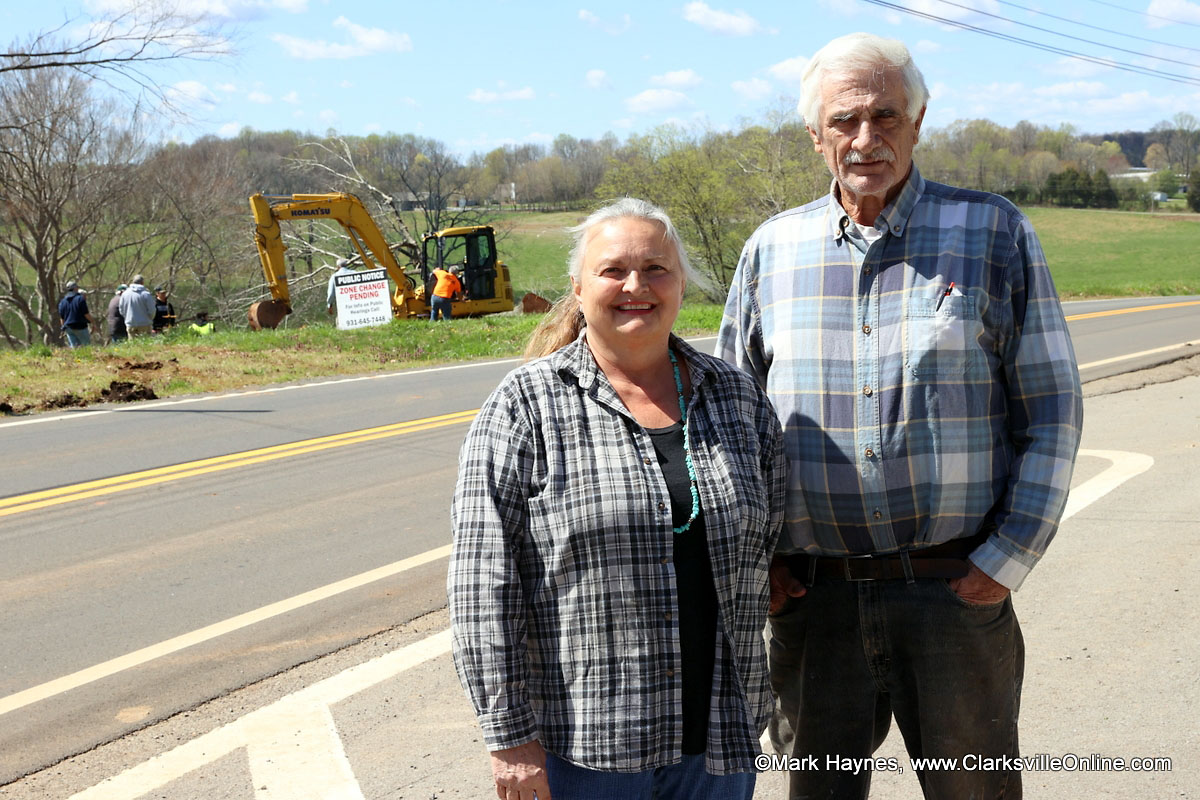 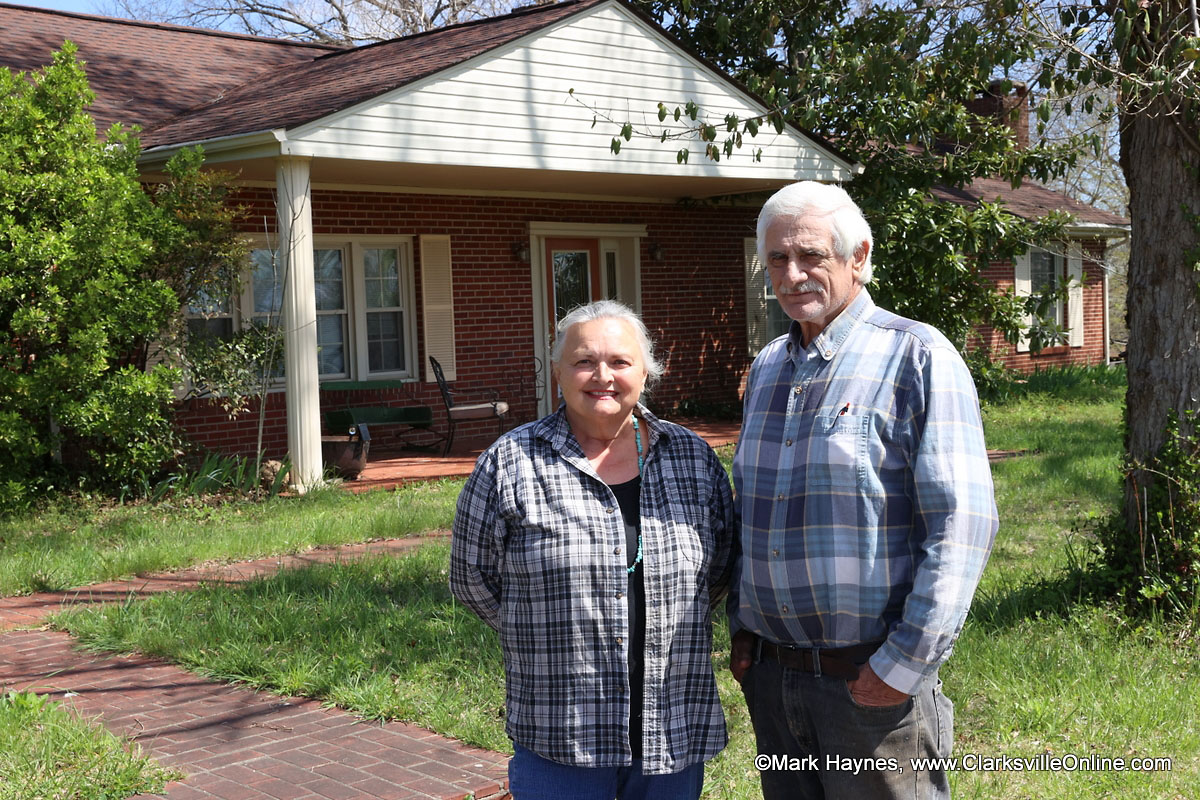 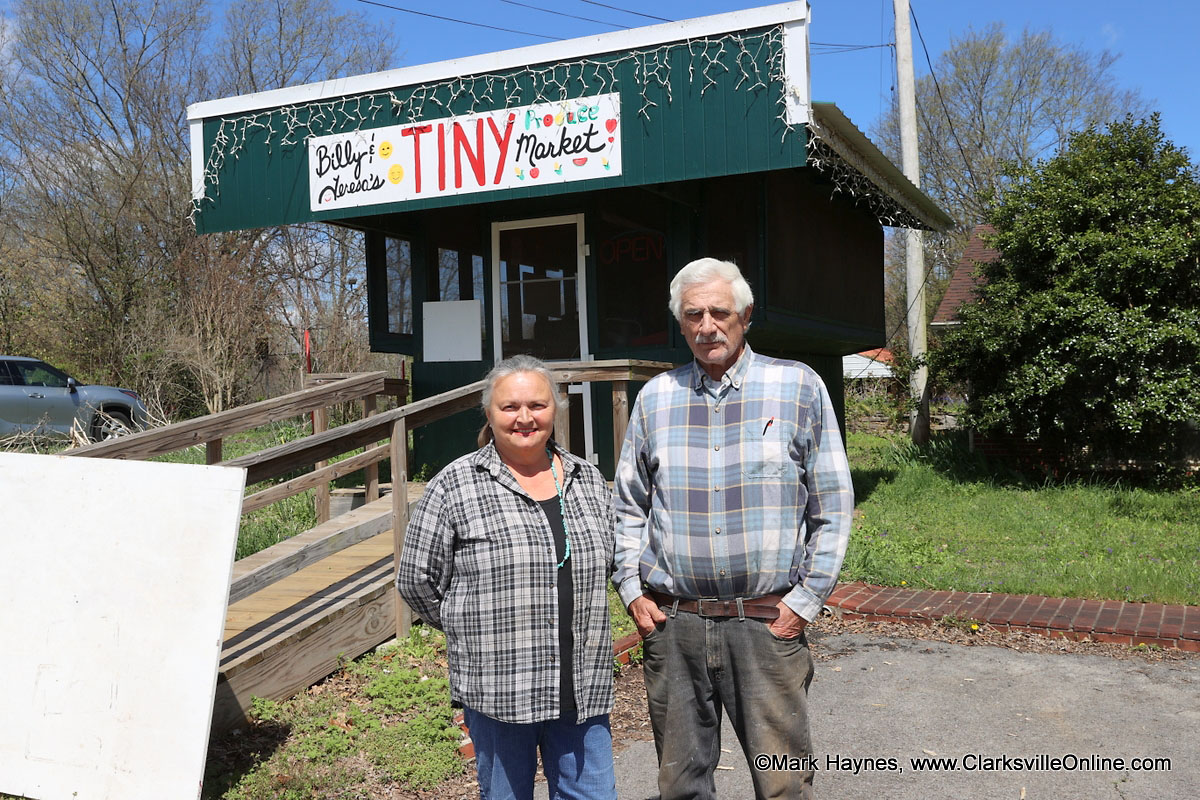 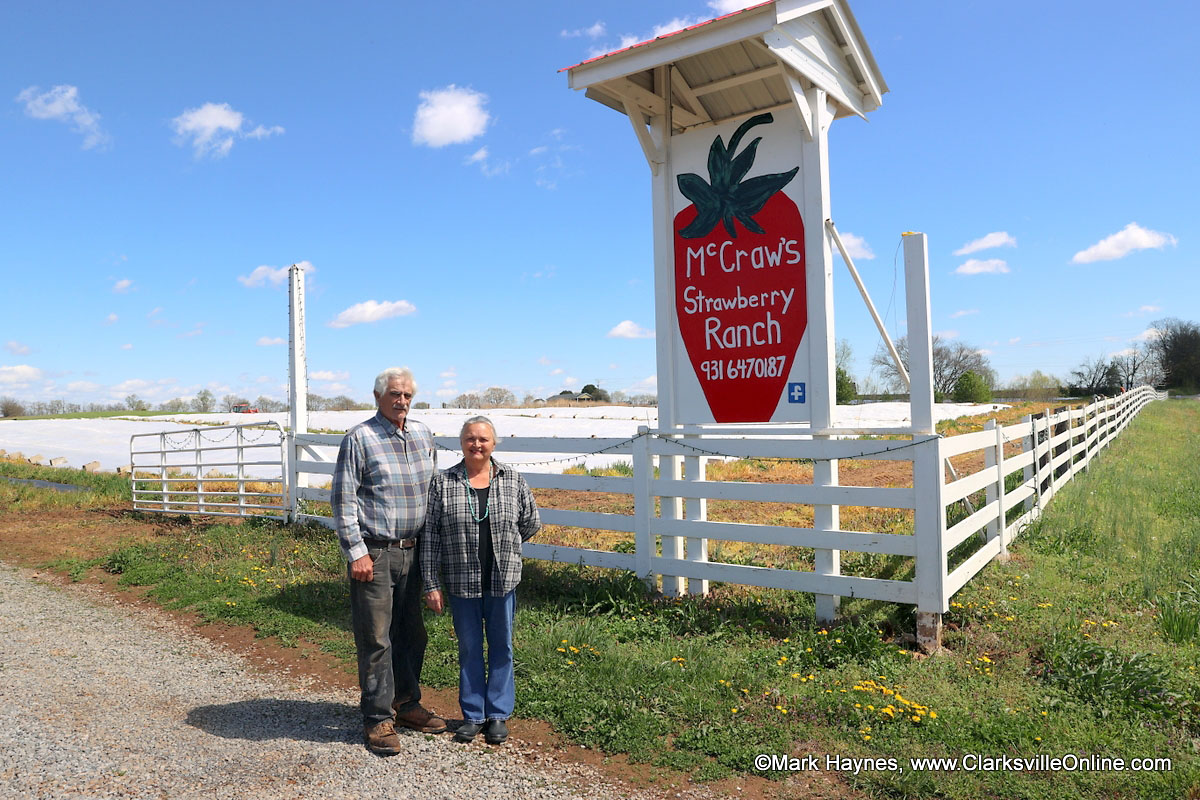 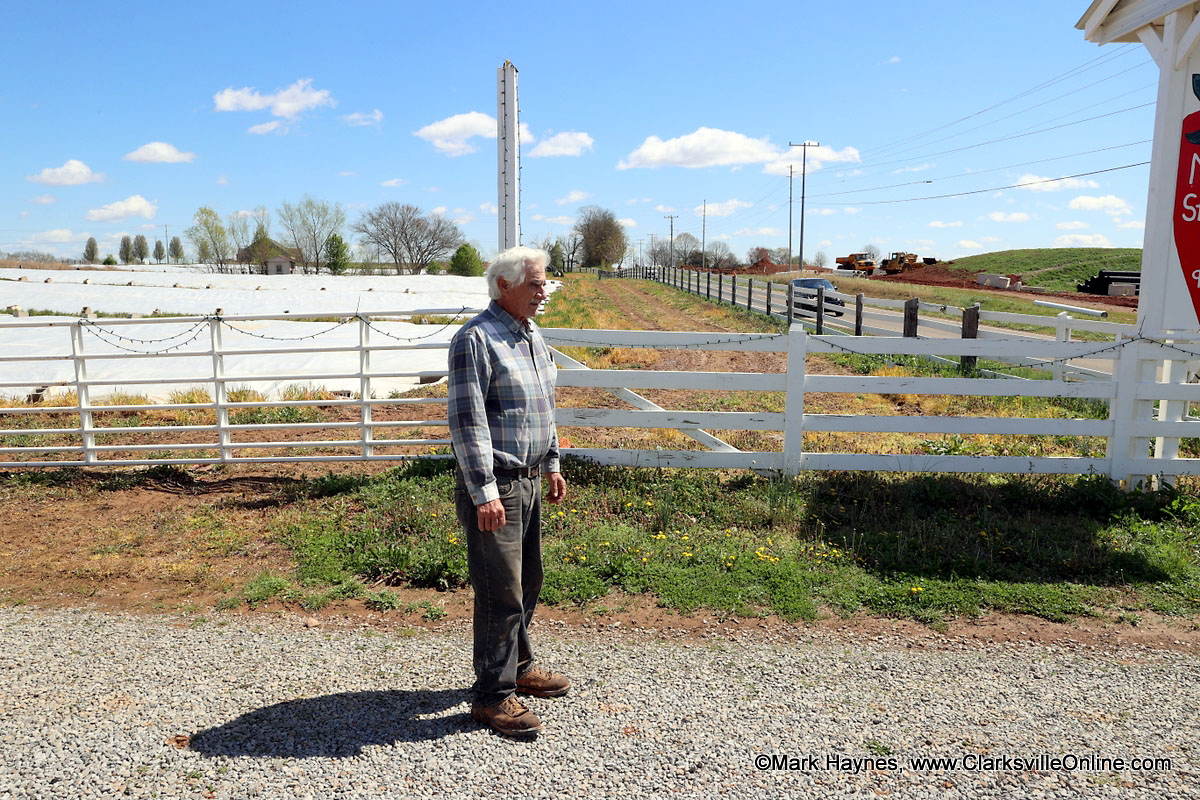 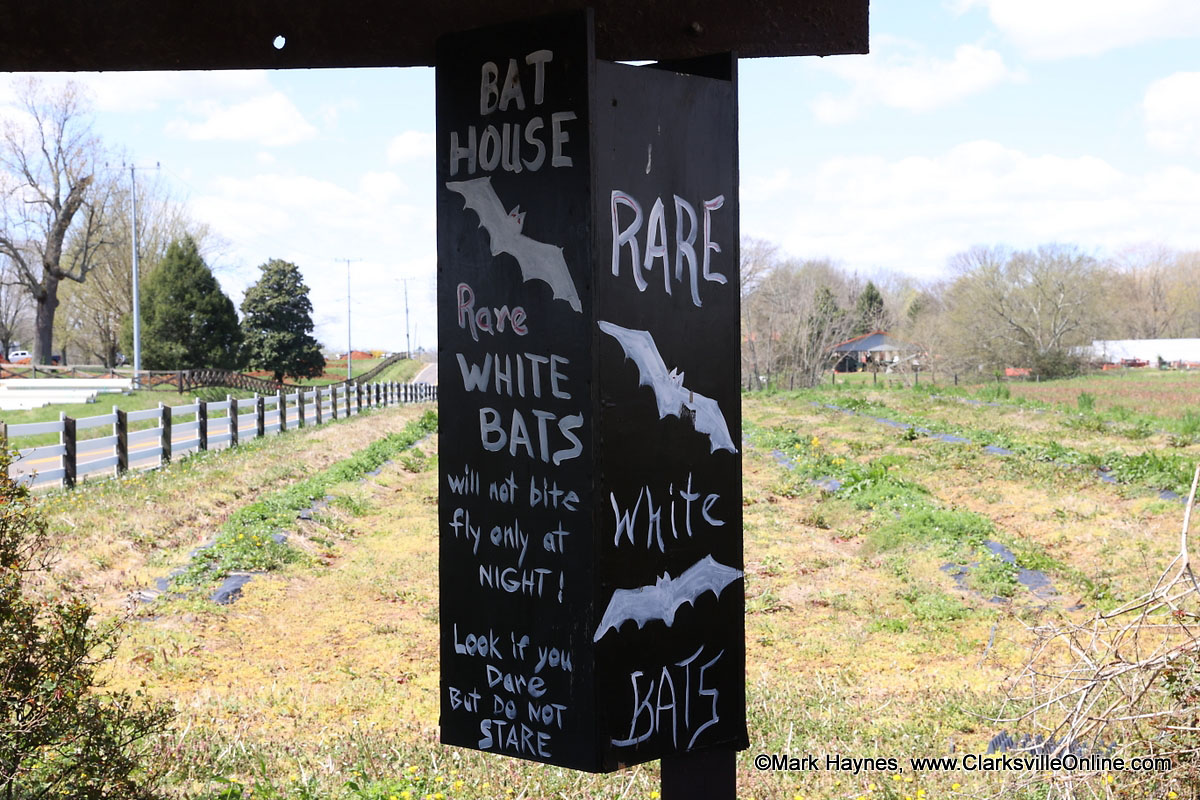 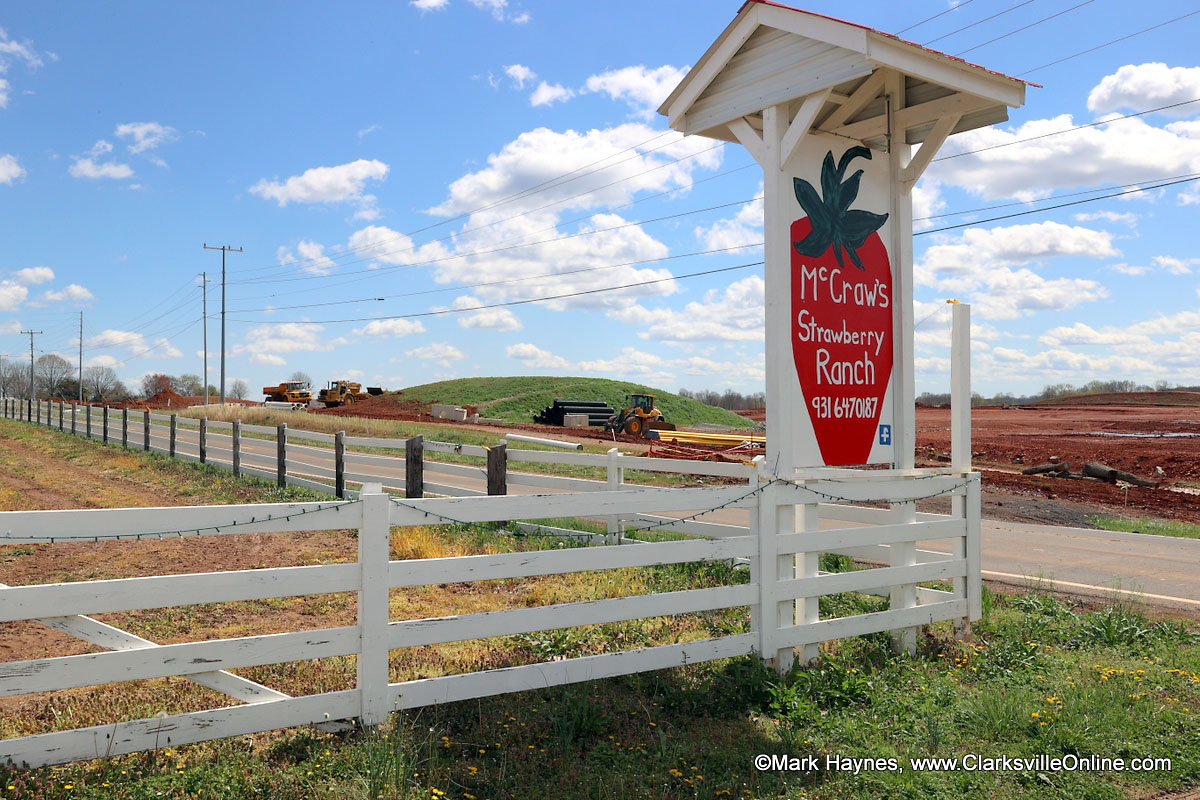 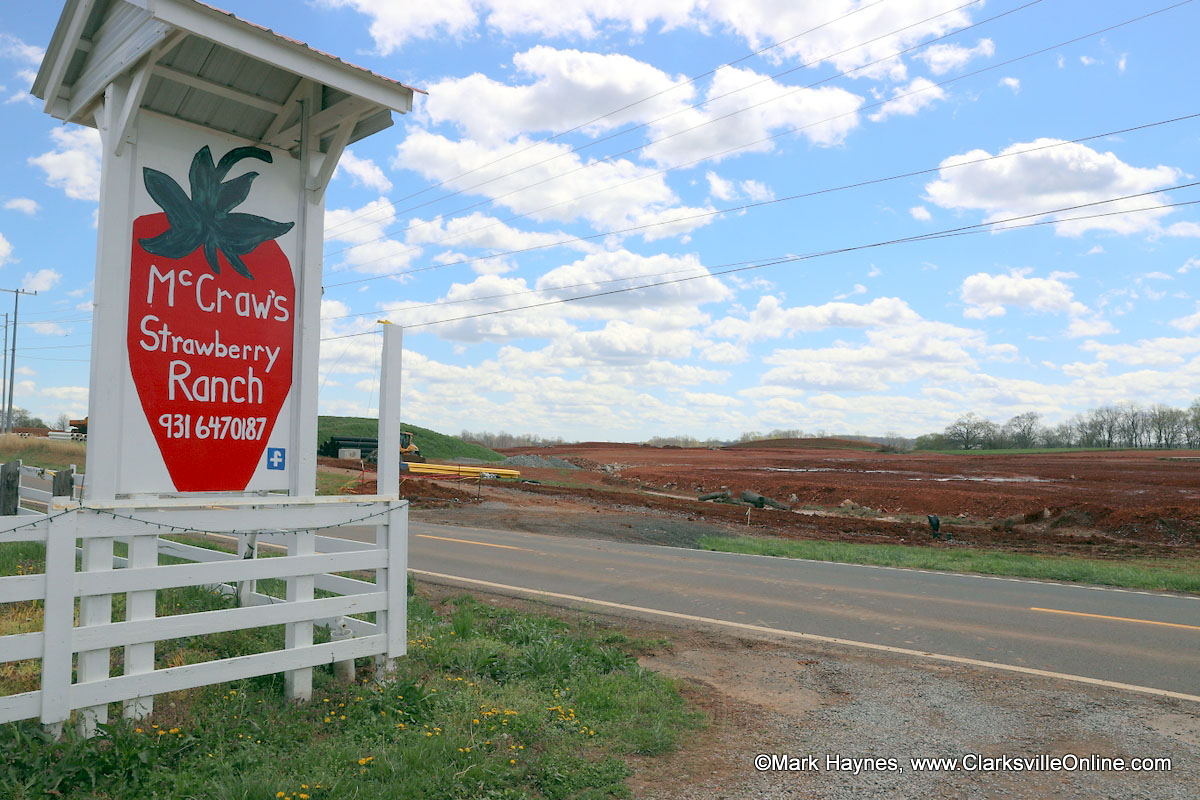 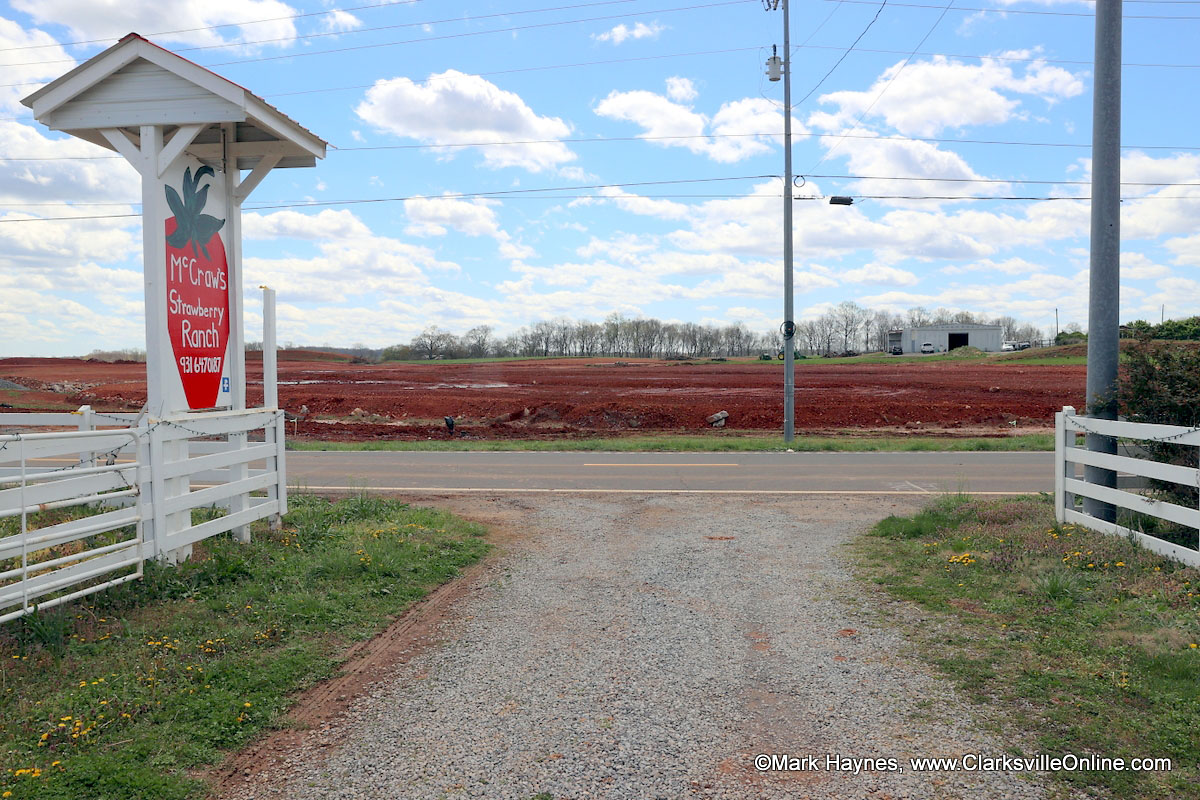 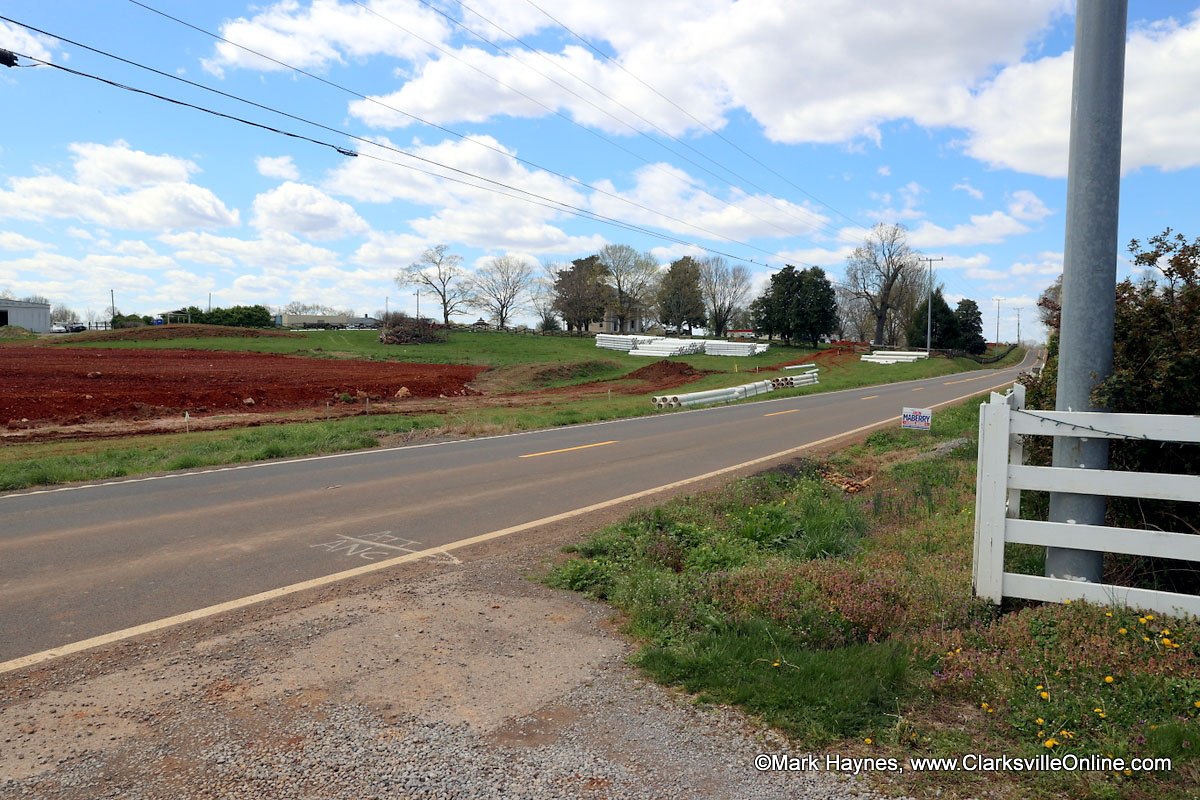