A travelling Fool takes his puppet stage to a desert planet. In this retelling of the myth, eating the apple is an essential step towards changing from puppet to human, and part of his plan from the beginning.

Way back in June 2006, some of the Haiku Challenge keywords were Tree, Apple, and Fall. That led me to the Adam and Eve story. Reflecting on what it is to be a stop-motion animator today led me to the main character – you’ve got to be a fool to do it, but you also have this godlike power to create characters and worlds.

The French title was chosen because in addition to the meanings of the English word it also refers to a Compere or Master of Ceremonies, which seemed to fit the role of travelling showman.

The film was rushed to make the deadline for Annecy, and has more technical faults that there is space to list, but was fun to do all the same. It was set to recorded music by Earthly Delights, who conduct medieval dances, rather like bush dancing or square dancing, in Canberra, Australia. John Garden composed it and plays the Hurdy Gurdy, which felt exactly right for the puppet stage.

The Stiltfrog puppets are latex build-up over wire, about 4 inches tall. The Fool has a cushion foam body, latex build-up hands, and a foam latex head. Adam and Eve are Sculpey over epoxy putty, then foam latex puppets. It was shot on a Nikon D70 which developed flicker, and was replaced by a D50 which flickered from the start, though not as much. Compositing was done in Mirage, with a couple of planet shots put together in Lightwave.

Lionel I. Orozco from  Stop Motion Works commented about our posting of Nicks work at Clarksville Online. He has a point:

Nick Hilligoss has gone VIRAL? …. He is spotlighted in a local USA online paper/voice from Clarkesville, Tennessee. Read about it, L’Animateur by Nick Hilligoss (StopMoShorts also mentioned). Nick has been YouTubified, Yahoo Videofied, Google videodized, the French Koreus.com site and here, here, etc. etc. and so on. Where are the ‘suits’ (producers), studios, ad agencies who can perhaps offer Nick some animation gigs, or commissions, contract? Nick shed his own blood, sweat, tears

and personal $$$ to create L’Animateur. Always, Stop Motion struggling to get respect & recognition and astounding, the sometimes amazing quality of work with verrrrry low budgets. Can you imagine, the leaps & bounds of Stop Motion, if you threw just a little money at it? – Lionel I. Orozco  Updated: 06.04.07

So if you know anybody in the film business or advertising industry,  show them Nick’s work, and lets get him some exposure! 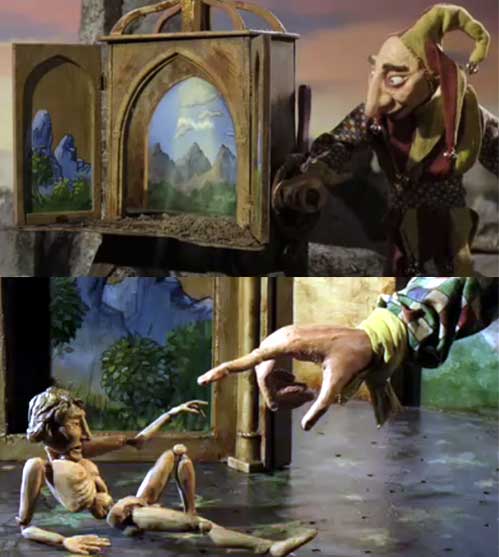 * The text in this article is based off of the authors description of this video on his submisssion at StopMoShorts.