Ready or not, here comes SiCKO!

Michael Moore is coming out with a new documentary called SiCKO. It is a harsh look at the American health care system. SiCKO opens in theaters everywhere on June 29th.

When asked about SiCKO, Michael Moore responds , “Sicko is a comedy about 45 million people with no health care in the richest country on Earth.” I personally disagree with Michael Moore on that one point, this is not a funny subject.

A reviewer on the Internet Movie Database web site had this to say:

A man without health insurance (companies simply refuse people), whose middle- and ring finger are cut off, had to choose between paying 60.000 dollars for having his middle finger restored and 12.000 dollars for having his ring finger fixed. Being the “romantic” that he is, he chose his ring finger. A woman, formerly with a good job, bankrupted by her medical bills and forced to live in the study of her daughter, has to pay 240 dollars a month for her cancer medication but gets the same pills on Cuba for… 10 cents. 45 Million uninsured Americans live in fear that they might, some day, need medical care. The rest of the world doesn’t know these fears, because for them, medical help is free: paid for by tax money. The United States have become ruthless to it’s own people. It contradicts the image Americans have of themselves and their country, but it’s the awful truth. – Ivo Martijn

Americans have the most expensive health care in the world. We have one of the highest infant mortality rates, and we have the second lowest life expectancy for any nation which isn’t in the third world.

It’s also no wonder that we have a outsourcing crisis, in America the business bears the entire cost of their employee’s health care. So a corporation benefits when they use workers in another country, one with a single-payer health care system. In American health care is anything but cheap.

We are not even getting the best possible care for the huge amounts of money we spend. Corporations providing for-profit health care do not reap huge profits from providing the best health, they are successful only when they provide the least.

Lets take a look at the World Health organization’s ranking of the worlds national health systems. Don’t look for the USA in the first 3 rows. America is at #37. Dominica and Costa Rica have better health systems. Yes this really is best health care that capitalism can provide. Our health care system ranks just above Slovenia, Cuba, and Brunei.

While you might say it could be worse, I would promptly respond that our health care system couldn’t be a worse joke.

It does not matter if you like Michael Moore or not, we should all be grateful that he had the courage to document the problems with America’s health care system. Because understanding that there is a serious problem, we are one step closer towards fixing it. 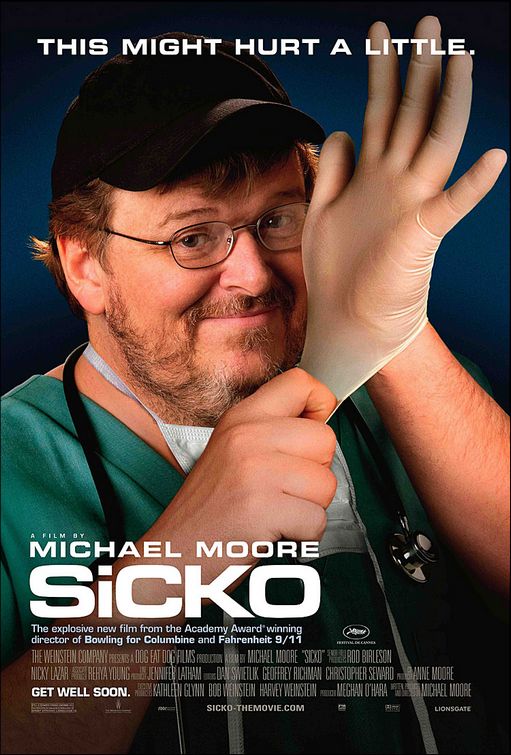