One in three women worldwide will be beaten, raped, coerced into sex or otherwise abused in her lifetime. Every two and a half minutes, somewhere in America, someone is sexually assaulted. Every 15 seconds a woman is physically assaulted by an intimate partner. 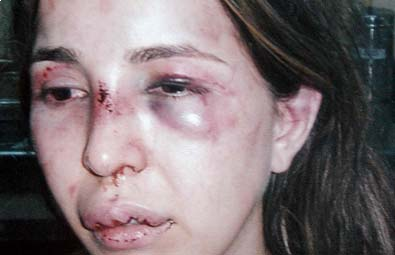 Throughout the world, women face violence every day. From the battlefield to the bedroom, women are at risk from violence in all areas of life. Violence against women is an abuse that is not confined to any political or economic system. It is prevalent in every society in the world. It cuts across boundaries of wealth, race and culture. It affects the young and the old. Wherever we live, women are suffering violence.

The underlying cause of violence against women lies in gender discrimination – the denial of women’s equality with men in all areas of life. Women are also targeted because of their race, class, culture, sexual identity or HIV status, or because they are from poor or marginalized communities.

In many countries, violence against women is written into the law. In Jamaica the law fails to protect women from marital rape, incest and sexual harassment. Discriminatory maternity and infant health services in Peru are letting hundreds of impoverished women and children die every year and denying many of them the right to an identity.

Violence against women happens because far too often governments turn a blind eye to it, do not punish those who commit crimes against women and fail to ensure effective access to justice for women. The single most important factor that allows violence against women to persist, whether in times of peace or in times of war, is rampant impunity. Those who attack and rape women, know that they can get away with it, even though rape and other forms of gender violence have long been prohibited under international law.

Two thirds of sexual crimes in Hungary are committed by people known to the victim, yet few of the perpetrators are tried for their crimes. Rape by police and security forces is endemic in Nigeria as is the abject failure of the Nigerian authorities to bring perpetrators to justice.

The government’s ongoing failure to tackle violence against women in Papua New Guinea has resulted in this violence becoming so pervasive that it impedes national development and contributes to the spread of HIV/AIDS.

Violence in the home

Women remain at risk within their own home as well. 50% of women who die from homicides are killed by their current of former partners. Tens of thousands of women in Georgia are hit, beaten, raped and in some cases even killed by their husbands or partners. A very small percentage of women seek help and justice from violence. Many stay with their partners because they have nowhere else to go and lack financial independence.

Nearly 3,000 women were registered as victims of violence in the home in Belarus in 2005, although the actual number is believed to be much higher. As there are no shelters for victims of domestic violence in the whole of the country, these women have nowhere go.

A lack of adequate temporary housing in the Gulf Cooperation Council (GCC) — Bahrain, Kuwait, Oman, Qatar, Saudi Arabia and the United Arab Emirates – means that women have little opportunity to seek redress in a secure and safe environment.

States must protect women from domestic violence by ensuring that adequate laws are in place, that specialist training or health care is available, and by ensuring women who need it have access to shelters.

During armed conflicts, violence against women is often used as a weapon of war, in order to dehumanize the women themselves, or to persecute the community to which they belong.

Acts of violence against women are often ordered, condoned or tolerated by those in the highest echelons of political or military power. They persist because those in power do not acknowledge the wrongs that have been done and rarely prosecute those who have committed them. Tens of thousands of women and girls have been subjected to sexual violence during the conflict in Darfur. No one has yet been tried or prosecuted for these crimes.

In the context of the current conflict in Cote d’Ivoire many women and girls are the victims of gang rape or are abducted and forced into sexual slavery by fighters. Rape is often accompanied by beatings and torture — often committed in public and in front of family members. To Amnesty’s knowledge, none of the perpetrators of these crimes has ever been brought to justice.

Despite governmental lack of interest and social apathy and silence in many countries – activists around the world continue to campaign against violence against women and to confront discrimination and impunity.

Much of what has been gained in women’s human rights so far has been thanks to the efforts of women themselves. They have organized themselves, broken taboos, spoken up – sometimes at great personal cost – and have led brave and inspiring campaigns against violence against women. They have achieved dramatic changes in laws, policies and practices.

Some of them are victims and survivors of violence themselves who despite risks and difficulties and together with human rights defenders, women activists, women’s organisations and the women’s movement take a stand and speak out against violence in order to make a difference for all women in the world.

Many human rights defenders face risks, but women encounter additional risks because of their gender and the issues they address. Women who defend the human rights of women, especially women from marginalized racial or ethnic groups, can find themselves under threat of violence. Because they often challenge cultural, religious or social norms about the role of women in their society, they are frequently subjected to harassment and repression, ranging from verbal abuse to sexual harassment, rape, and murder.

Often, when women pursue legal action and stand up for their rights, they are faced with hostile systems and environments. Frequently, women activists have had to face ridicule and prejudice when they have sought to take leadership in communities or societies that view the woman’s role as strictly one within the family. Women who have dared to challenge social and religious conventions have been subjected to public accusations aimed at discrediting their character. Women protesting against discriminatory laws and practices are often accused of being traitors to their faith or culture or enemies of the state.

In March this year, four women’s rights activists in Iran were sentenced to prison for their role in organizing the peaceful protest and demanding equal rights for women in Iran in June last year. The activists are organizers of the “One Million Signature Campaign” launched in August 2006 that demands an end to discriminatory laws against women. They were officially charged with “actions against the state” and threatening “national security” and all four of them were tried in absentia.

Violence against women may be universal but it is not “normal” or “inevitable”. As long as women are denied their human rights, anywhere in the world, there can be no justice. Recognition of women’s human rights is an essential requirement for every society. Individuals and communities have vital roles to play in overcoming discrimination of women, impunity and gaining justice.

States must prevent, investigate and punish those responsible and we must break the silence – Act now, Stop Violence against Women. For more information visit Amensty International, The Health and Human Services Womens Health web site, or the Lifetime End Violence Against Women web site.

* Information in this article came from from Amnesty International and LifetimeTV.