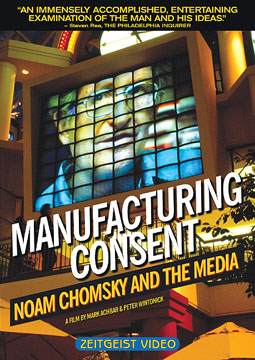 
The film was honoured with 22 awards and distinctions, screened theatrically in 300 cities and aired on 30 national TV networks. The 2 hour-45 minute epic is the top-grossing feature documentary in Canadian history.

This documentary is available on DVD for 29.99. So go buy a copy!

An invigorating introduction to one of the least soporific of American minds. – NEW YORK TIMES

Watch out for this film… it can make you think! – Ralph Nader

An immensely accomplished, entertaining examination of the man and his ideas -THE PHILADELPHIA INQUIRER

Zeitgeist Films Ltd. was founded in 1988 by co-Presidents Nancy Gerstman and Emily Russo. From its beginning Zeitgeist Films has differentiated itself by focusing on the more discriminating and adventurous filmgoer, whose needs were not being met by traditional “arthouse” fare. Zeitgeist films are strongly auteur-driven and have a distinct visual style and unique content.

* Information on this video was taken from the Zeitgeist Films page for this movie.