HomeNewsStudents breathe new life into a remnant of the 60s: SDS rises...
News

Students breathe new life into a remnant of the 60s: SDS rises at APSU 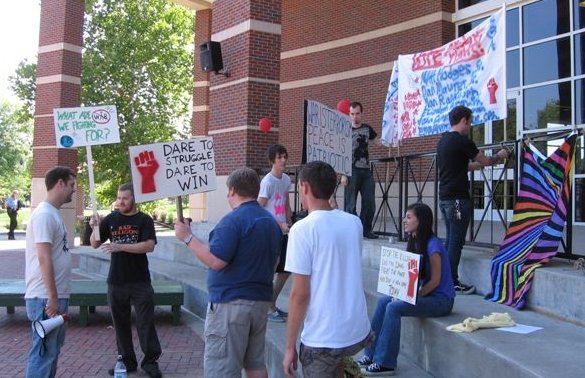 The liberal ‘monster’ awoke and raised its head today on the Austin Peay State University Campus, growling its way to awareness a bit earlier than planned due to a scheduling conflict in time and place. But despite this little known, last minute change, some 30 people showed up to stand with the fledgling antiwar group, including professors, administrators and FreeThinkers.

A dozen students at Austin Peay State University have resurrected Students for a Democratic Society (SDS). They gathered Friday from 10:30-noon at the Student Center plaza for an anti-war rally. They were a small group with a loud voice, large banners, small signs and handouts opposing the War in Iraq and the assault on civil liberties.

Congress shall make no law respecting an establishment of religion, or prohibiting the free exercise thereof; or abridging the freedom of speech, or of the press; or the right of the people peaceably to assemble, and to petition the Government for a redress of grievances.

— The First Amendment to the U.S. Constitution

They were a vocal minority, gathering additional voices of support as the rally on this conservative campus unfurled. The group utilized the momentum of national Iraq Moratorium movement as the catalyst for what they hope will be a series of peaceful protests against the War in Iraq and the flawed policies that support it. Iraq Moratorium is a movement that has designated every third Friday as a day of protest against the Iraq war and Bush Administration policies. The group was outspoken about supporting the troops by working to “bring them home.”

The demonstration started peaceably with megaphone chantings of “end the war,” but the peaceful tone changed quickly. Two bystanders, both claiming to be Iraq vets, made it clear they aspired to be the center of attention with an escalating and threatening heckling of the SDS students.

SDS members were fiercely challenged by several Iraq veterans on campus who seemed intent on verbally disrupting the message of the protest, filming the protesters and their hecklers, and refused to listen to another side of the issue. The vets in attendance refused to engage in civilized debate and disregarded the fact that the SDS students have a right to free speech and free assembly — in this case via a protest; it is one of the very rights the veterans are sworn to uphold and defend, both here in the United States and overseas, in Iraq. That doesn’t end when their term of service is over; it is a lifetime pledge.

“SDS confronted [the vets]. A growing crowd gathered to watch the jeering. More and continuous questions, more like attacks, came from the crowd and it was tense, to say the least. Meanwhile, more anti-war students were showing up in the background, taking their place on the steps of the student center. ‘Coconut Tom’ (joined by Kimp Chi) danced between the angry confrontations.

“The jeering twosome said “‘I’ve been to Iraq. You can’t say anything bad about the war because you haven’t been there. Why don’t you enlist so that you can have an opinion?'”

SDS members engaged in the heated debate as the rest of the protesters stuck to the plan of a peaceful dissent. The persistence of the hecklers made them seem like ‘plants’ injected to degrade the assembly and stir up controversy and agitation.

APSU, which is notoriously conservative and non-controversial to the point of invisibility, has been conspicuously silent on the issue of politics, the war and the 21st century peace movement, which increasingly mimics the peace movement of the 1960s during the Vietnam era. We’ve heard the songs, the chants, the speeches before. Deja vu.

Granted, the SDS is facing a tough audience and a tough sell in a city that derives a hefty percentage of its economy from Fort Campbell and its troops. What is evident, though, is that there is a growing national discontent with the state of the War in Iraq, the state of Congress on Capitol Hill and the President in the White House, and that discontent is slowly garnering power and form even in conservative Clarksville. That discontent is garnering power and form even on a campus where quiet hours begin at 8 p.m., where wine, candles, and incense are banned, and homecoming, football games and amplified music at the noon hour are the rowdiest it gets. 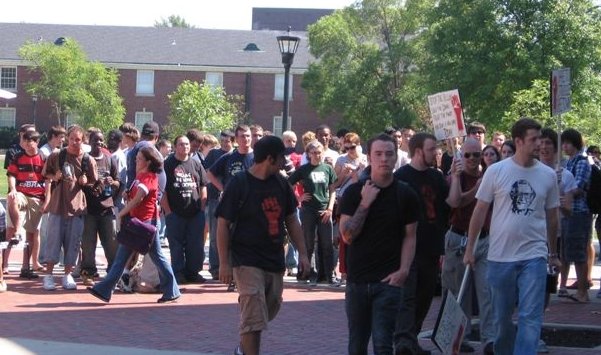 Outside the Student Center at APSU

On Friday morning, SDS had the guts to stand up and speak out on issues they believe in, and their courage is the kind of thing that will draw others to their fledgling group and draw in other groups, organizations and concerned individuals, one at a time. Where better to find and develop a voice than on a campus of higher learning where one is supposed to think “outside the box,” develop opinions and ask difficult questions?

“We don’t know how many friends the SDS won this morning, or if they felt better about themselves afterwards, but we do know they didn’t back down. They got a lot of attention, and were filmed by several people.We showed up in solidarity with them, and so did other people from on and off campus. We’ll stand with them anytime. And we are damn proud and so glad that the liberal monster has shaken off its sleep drool at Austin Peay.

“This is the same university that was not allowed to discuss current politics during the 2004 election (what did they do in political science classes?). This is the same university which was not allowed to post anything on the school grounds unless it got the President’s approval. We applaud Austin Peay and it’s SDS with an appropriate cheer: Go Peay!”

Boen said that current issues facing America are “not going to go away, become less important or boring.” She added:

“… liberals cannot crawl back into their shells, especially as they learn to talk back to these bullying (plants) still spewing about our not supporting the troop (a lie), still thinking the war is about 9-11. If they really cared about the troops, they’d do a little research. And turn off Fox News.”

SDS was joined in this event by FreeThinkers for Peace and Civil Liberties, who offered support and who have staged other peace vigils and anti-war events in Clarksville. The FreeThinkers, which formed in Clarksville in 2004 after the presidential election, brought one of their free-standing war statistics signs to the rally.

A bit of SDS History

Historically, the Students for a Democratic Society (SDS), with its minimalist logo, was one of the iconic representations of the country’s new left. The organization developed and expanded rapidly in the mid-1960s before dissolving at its last convention in 1969.

As a student group with a strong belief in decentralization and a distrust for most organization, the SDS did not have a strong central bureaucracy. In the academic year 1962-1963, the President was Tom Hayden, Most activity was oriented toward Civil Rights issues.

SDS was the organizational high point for student radicalism in the United States and has been an important influence on student organizing in the decades since its collapse. Participatory democracy, direct action, radicalism, student power, shoestring budgets, and its organizational structure are all present in varying degrees in current national student activist groups. Though various organizations have been formed in subsequent years as proposed national networks for left-wing student organizing, none has approached the scale of SDS.

In early 2006 SDS was “refounded” by high school and college students, with the help of former members of SDS from the ’60s, and has grown rapidly through local chapters, regional and national conventions. The “New SDS” takes the name, inspiration and focus on participatory democracy from the original group, but is a completely new youth- and student-led organization.

As Vietnam worked its way toward disaster, in the spring of 1968, National SDS activists led an effort on the campuses called Ten Days of Resistance and local chapters cooperated with the Student Mobilization Committee in rallies, marches, sit-ins and teach-ins, which culminated in a one-day strike on April 26. About a million students stayed away from classes that day, the largest ever student strike in the history of the United States.

It was largely ignored by the New York City-based national media, which was intensely focused on the student shutdown of Columbia University in NYC, which was led by an inter-racial alliance of Columbia SDS chapter activists and Student Afro Society activists. As a result of the mass media publicity given to Columbia SDS activists such as Columbia SDS chairperson Mark Rudd during the Columbia Student Revolt, SDS was put on the map politically and “SDS” became a household word in the United States for a few years; and membership in SDS chapters around the United States increased dramatically during the 1968-69 academic year. Polarizing groups within the SDS ultimately caused the organization to collapse upon itself.

On June 26, 1972, the U.S. Supreme Court gave a unanimous opinion, in the case of Healy vs James, stating that members of the SDS had been unconstitutionally deprived of their First Amendment right to freedom of assembly when a group was denied permission to form on the campus of Central Connecticut State College in New Britain, CT.

Beginning January 2006, a movement to revive SDS took shape. A small group of high school and college students reached out to former members of the “60s” SDS, to re-envision a student movement in the United States. They called for a new generation of SDS, to build a multi-issue organization grounded in the principle of participatory democracy. Several chapters at various colleges and high schools were subsequently formed.

Within its first year and a half, the new SDS for the 21st century has grown to include hundreds of chapters and thousands of members. SDS has bulit an impressive list of ally organizations, with which it works on issues locally ranging from worker’s rights to climate change. The organization has developed a deep commitment to strategy., mentorship and peer training, which has focused a new generation of student radicals on the fundamentals of movement building.

A sampling of SDS headlines around the USA from 2007

‘Whose Streets? Our Streets!’ Students protest war by hundreds on anniversary – Daily Tarheel

Anti-war org is back – Rutgers Observer

Young America is finding its voice, and learning to use it.