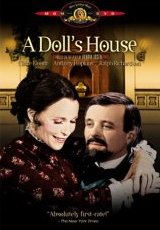 A Doll’s House is considered to be the first “feminist” play, challenging the Victorian ideal of a woman’s role in marriage. When initially written back in 1879 — yes, 1879 — it was banned in Britain and the subject of controversy and requests to “change the ending.” All the more reason to see it. Not that it is the target of such controversy today; in fact by modern standards the play is tame.

In Ibsen’s time, though, when women were considered “fragile” subservient to men in marriage and men controlled the home, the money and the lifestyles, having a female character dare to walk out on a sacrosanct marriage was, well, unthinkable. Sacrilegious.

Nora, mother of three young children, is married to Torvald, who patronizingly refers to her as his “little skylark” and “squirrel.” She is considered the “fluff’ of the household, a fixture, a possession, a trophy. What Torvald doesn’t know is that while he was very ill, Nora borrowed money to sustain the family, but never told him, fearing it would wound his pride, of which he has plenty. Nora forged Torvald’s signature to get the money and is now being blackmailed and pressure to repay money she does not have. Add to the mix a doctor who now professes his love for her, and Nora’s life is about to implode.

She hides her secrets, hides the mail, contemplates suicide, and ultimately decides to tell her husband the truth. His reaction is egocentric, and he berates her, degrades her and becomes physically violent with her. He tells her she is unfit to be a wife and mother but that he will condescend to “keep her” for the sake of the children.

On this precipice comes the awakening: Nora realizes she must make choices in her life and reaches within for the power to do what is her own best interest.

A Doll’s House is a landmark among plays, required reading in many secondary schools, and the subject of discussion by those who study feminist literature. Though the ending was changed during many early productions to meet the standards of the time, modern stagings and films hold true to the play and its ending as Ibsen originally wrote it.

Two film versions were made, both in 1973, one with Jane Fonda and Trevor Howard that went directly to television, and another — my personal favorite — starring Claire Bloom, Anthony Hopkins and Ralph Richardson, which played movie theaters across the country.

A Doll’s House will run Nov. 9-24 with a Matinee performance on the 17th. For ticket information, call the Roxy Box Office Monday through Friday from 9 a.m. to noon at 645-7699.