Another punch has been thrown in the ongoing battle between the Clarksville Property Rights Coalition and both city officials and the Downtown District Partnership: the CPRC has been slapped with a lawsuit over a dissenting advertisement on the issue of redevelopment.

The suit was filed by Wilkinson and Swift on Friday in the 19th Judicial District, Circuit Court of Montgomery County against the CPRC as an organization and, Pam Vandeveer, individually as CPRC treasurer. You can read the complete text of the lawsuit here at Clarksville Online. 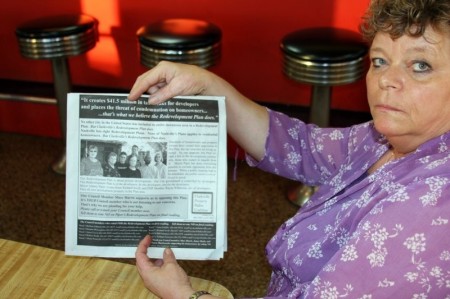 At issue is the veracity of an ad which ran in the Leaf Chronicle on May 3, prior to the May 8 City Council special session at which the final reading and approval of the highly controversial Downtown Redevelopment and Urban Renewal Plan occurred. The ad stated that Clarksville Mayor Johnny Piper, Councilman Richard Swift and DDP member Wayne Wilkinson as developers who worked for passage of the comprehensive redevelopment plan that would cover roughly two square miles of down town Clarksville and which designated the area as blighted.

The lawsuit charges that the CPRC ad made “libelous” statements against plaintiffs Wilkinson and Swift when the CPRC ad implied that [the plaintiffs] placed their “development interests” above the wishes of the community and their constituency.

In responding to news of the suit, Becky McMahan, a member of the CPRC Steering Committee, said:

“We believe the libel suit filed by Downtown Development Partnership [DDP] Member and former Chair Wayne Wilkinson and Clarksville City Council Member Richard Swift against the Clarksville Property Rights Coalition is frivolous. All statements regarding Councilman Swift and Mr. Wilkinson made by the CPRC in our advertisement in the May 3rd Leaf-Chronicle were factual and were truthful.

These are public figures. The law simply does not support their claim given the facts here. It appears the plaintiffs are trying to intimidate and scare ordinary citizens from exercising their right of free speech in trying to defend their homes and their businesses from the threat of condemnation for private development, which this redevelopment plan allows.”

The text of the highly-debated ad reads:

“Hundreds of homeowners and property owners have voiced their opposition to this Plan, but our concerns are being ignored. No one supports this Plan except a few in the development community, those who expect to benefit from it. Mayor Piper has done everything possible to exclude opponents from the process. When a public hearing had to be scheduled, the public wasn’t even allowed to speak.

Ironically, the very action of placing the ad with the Leaf Chronicle became a chess game with the newspaper initially opting not to run the ad, only to later accept it after consulting with their attorney and requiring attribution of the ad to the CPRC. The ad, which CPRC was told had been slated to run on page 4 of the May 3 edition, was in fact placed in the back section of the paper, which is published by Gene Washer, a member of the DDP.

The suit charges that:

The suit further charges that the ad “falsely attacks the good reputations” of both plaintiffs and claims the statements in the ad damage their reputation and public perception. Although named in the ad, Mayor Piper is not one of the plaintiffs.

“Discovery,” the process of investigating these claims, is underway with the understanding that more members of the CPRC will be included in the suit with the names and addresses made part of the public record. 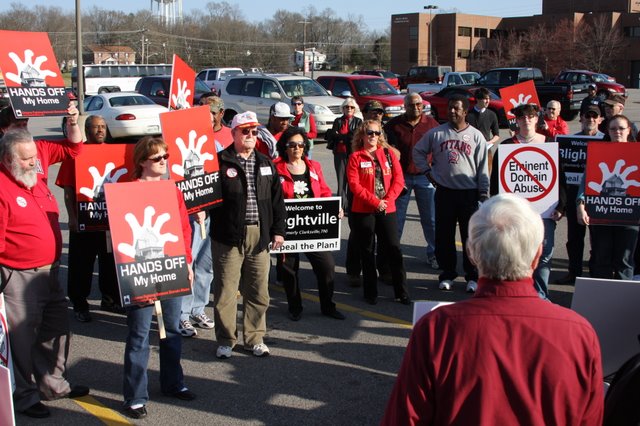 An overflow crowd of CPRC members gather outside a public hearing

The grassroots CPRC organized late last year when they learned of an ordinance that effectively “blighted” their neighborhood in the name of redevelopment. Standing room only meetings were held at the H.O.P.E. center on Legion Street and at the L&N Train Station. Hundreds of residents and small business owners wrote postcards and otherwise contacted their representatives and the city council at large to voice concern, outrage and overall dissent with the original, which was found to be in violation of state law including improper notification of affected citizens. They have remained active and vocal in their opposition to the original and the revised law. At the time of the final vote, some sections of the revised ordinance were changed back to the original form, including an option appoint rather than elect community representatives to the redevelopment board.

McMahan said all Clarksville residents should be “aware” of what is happening downtown since “representatives of the DDP said publicly last year, speaking before the Montgomery County Commission, that they have long-term plans to extend similar redevelopment plans out into other parts of the city.” 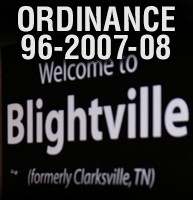 “The first redevelopment plan promoted by the DDP and approved by the Clarksville City Council in 2007 was legally flawed for not following state law. The members of the CPRC believe the redevelopment plan approved last week is also legally flawed under state law. If you can intimidate those affected by the Plan’s provisions, then you can effectively eliminate any challenge to the Plan’s legality.

“Isn’t it ironic that men and women from Ft. Campbell here in Clarksville are putting their lives at risk in Iraq and Afghanistan to protect our rights as Americans, while at the same time citizens from Clarksville weren’t even being allowed to speak at a public hearing called by the City of Clarksville, while trying to protect their homes from condemnation for private development?”

McMahan, speaking for the CPRC, said the group “will vigorously defend against this frivolous claim and pursue whatever legal recourse and remedies may be appropriate.”

The filing of this a lawsuit is one more ingredient in what remains an energized battle over property rights. On May 2, Clarksville NAACP President Jimmie Garland Sr. contacted HUD (Housing and Urban Development) in Nashville and the Justice Department in Washington, D.C. over the potential racial and minority impacts of this legislation on the downtown Clarksville community.

Tennessee has a little known piece of legislation on the books called the Tennessee Anti-SLAPP Act of 1997, SLAPP is shorthand for “Strategic Lawsuit Against Public Participation.” SLAPP lawsuits are designed to “discourage or retaliate for a person or group’s expression of free speech.

According to information available through the Legal Aid Society, such suits are not uncommon in situations where citizens “exercise their rights to make comments in opposition to a proposed corporate initiative or proposed land development. Such suits are used to “silence” or “intimidate” citizens by claiming libel, slander or “interference with business” and may seek redress in the form of substantial financial settlements. Beneath the surface, SLAPP suits are specifically designed to silence members of the public, or retaliate and punish citizens who wish to exercise their right of free speech or their right to a dissenting opinion.

The anti-SLAPP legislation is designed to protect citizens and within its provisions allows for citizens sued for exercising their right to “free speech” to ask the court for the corporation/municipality to pay defense fees and court costs.

Editor’s Note: to view development plans, news stories, and other documents related to this story, click the black “Blightville” box on the left side of the Clarksville Online front page.