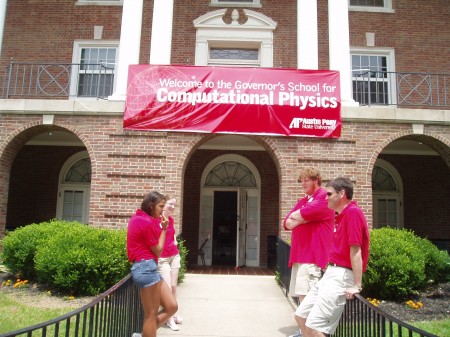 Students and mentors in the Governor’s School for Computational Physics being held for the next five weeks at Austin Peay State University talk on the first day of the school June 1. This is APSU’s first Governor’s School.

“The students selected for this program are very impressive,” said Dr. Jaime Taylor, professor of physics and interim dean of the College of Science and Mathematics. “They want to learn, and they are quick-minded.”

Austin Peay’s department of physics and astronomy, one of the first in the U.S. to implement a required course in Computation Methods, has earned a reputation for recruiting, retaining and placing students in prestigious fellowships, assistantships and doctoral programs. In 1999, the department had nine majors. By 2005-06, it had more than 60 majors.