On Flag Day, Honor our Flag!

As the holiday created to pay homage to our national icon arrives, it’s time to review the responsibilities attached to displaying the national emblem.

June 14 is Flag Day. This day celebrates the 1777 adoption of the official U.S. flag. Many people and businesses display the flag as a gesture of respect, patriotism, devotion and community spirit. All admirable attributes to be sure. To be sure your display is within guidelines, here are a few helpful excerpts from the Flag Code, United States Code Title 4 Chapter 1:

§6. Time and occasions for display

No disrespect should be shown to the flag of the United States of America; the flag should not be dipped to any person or thing. Regimental colors, State flags, and organization or institutional flags are to be dipped as a mark of honor.

Is it proper to wash a soiled flag? May I mend a torn flag?

Many dry cleaners will clean your flag at no cost. Ask your local cleaner their policy on cleaning flags.

My flag is old and ready to be retired. What should I do?

Section 8k of the Flag Code [see below] states, “The flag, when it is in such condition that it is no longer a fitting emblem for display, should be destroyed in a dignified way, preferably by burning.” We recommend that you contact your local VFW Chapter and ask them for help properly disposing of your flag. And be sure to consider providing a small donation to them for their assistance. Or you can contact your local Elks Lodge (who created the idea of Flag Day, established officially by President Truman, himself a member of the Elks), the American Legion, or the Knights of Columbus. Some Boy Scout and Girl Scout troups also can provide this service. 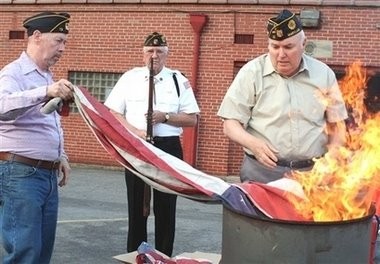 In earlier times, most American flags were made of cotton or wool. But today’s flags are often nylon or other petroleum-based materials. Burning them can release hazardous gases, including formaldehydes, ammonia, carbon monoxide, and traces of hydrogen cyanide into the air. In some states, it is even illegal to burn nylon, so adhering to the Flag Code puts you in direct violation of the law. Burning is preferred for cotton and wool flags. Nylon and flags made from other synthetics can be buried.

Modern flag retirement ceremonies, often held annually on Flag Day, sometimes feature the symbolic burning of a single flag (cotton or wool) and the burial of the others. This is both safe and respectful.