HomeNewsHope Cemetery: Life and death celebrated in a garden of granite
NewsSpirituality

Hope Cemetery: Life and death celebrated in a garden of granite

While On the Road in America, I continually look for unique and interesting places and people. In Barre, Vermont, I found just such a special place, a landscape irrevocably linked in life and death to the people of this community whose work is art in its highest form.

Ten years ago friends introduced me to Hope Cemetery, first in a quick drive-by on the way to somewhere else, and later, for a “quick” tour that became a lengthy monument-by-monument tour. For these monuments are like no others. They honor the dead, but are of themselves museum quality works of art and imagination that attract a flurry of annual visitors from all over the world. The granite monuments, carved from Barre’s own Rock of Ages Quarry, rank as the best granite craftsmanship in the world. Most people do not realize that many of the monuments across our country are crafted from Barre (and other Vermont) granite.

I walked the peaceful, quiet grounds, awestruck by the ingenuity of many of the stones, and by the willingness of the creators to step beyond the traditional “names and dates of life and death” inscription and create memorials that capture the essence of individual in the form of a hobby, a career, a love, a memory…

To say that the images unfolding here are breathtaking is an understatement. I was walking through an open air museum of the finest art.

Barre was known for its master craftsmen, Italian stone carvers of the late 19th and early 20th centuries. These master craftsmen were artists of incredible talent and ingenuity, working the rock solid stone into forms of grace and beauty, power and poignancy. The cemetery includes master works of custom figures, bas-reliefs and ornate crypts, where many of these craftsmen and their families were ultimately buried.

The Braun monument with its open book is one of my favorites.

This poem, in flawless cursive, in French, remains a tribute to Madeleine Braun. I was attracted to it first because of its sheer beauty, then the French language I love, and then the inscription “Madeleine,” which was my late mother’s name (she also spoke fluent French).

On every visit, I walk up to this stone and run my fingers over the inscription, never tiring of the words and the love they represent. It reads in part:

Just as a ray of sunshine, you illuminate my life
with your magnificent smile, your grand generosity,
your dynamic energy, and your marvelous joy in life.
Young of heart, body and spirit (mind)…
you are an admirable example of courage and love…
Your husband, your sons, and all who love you
We think of you and want to say ‘Thank you, Madeleine’
for giving us the chance to love you.”

The theme of love eternal continues with the near life-sized sculpture of William and Gwendolyn Halvosa, sitting up, one can only imagine them propped up on feather pillows, in their marriage bed. Pajama’d figures, shown holding hands, between them the inscription “Set me as a seal upon thine heart for love is strong as death” from the Song of Solomon 8:6. Their tombs stretch out before them, twin “beds” with a single headboard.

Hope Cemetery was established in 1895 and originally contained 53 acres. Since that time it has expanded to a total of 65 acres. Edward P. Adams, a nationally known landscape architect, created the original plan for the cemetery. In the past century, each section of the grounds has emerged after meticulous planning and intricate design, with the approved monuments representing strict architectural and artistic standards. The cemetery was created with an eye to attractiveness, ease of maintenance, and the provision of a unique opportunity for families to honor their loved ones.

While the cemetery has an seemingly infinite array of unique headstones, there is a uniform feel to the grounds because every single one of the monuments and crypts is carved from Barre Gray Granite. Custom carved stones are expensive, so many of the cemetery’s headstones are traditional, but among the more standardized markers visitors will find the amusing, the curious, the inspiring, the sentimental, and outright masterpieces.

Among the more unusual, and distinctly non-traditional, monuments is this race car, a half-size replica of race car #61, designed to celebrate local driver Joey Laquerre, Jr, who died in a 1991 snowmobile mishap. This is followed by a plane, captured angled in flight.

The stones represent the carvers, the artisans, themselves.

“The Dying Man” is stone artisan Louis Brusa’s own grave, a strange and evocative portrait of the carver in the arms of his wife, slipping into the afterlife. Brusa died in 1937 to silicosis, an illness that plagued stonecarvers and was which was caused by breathing in stone particles in the air at the quarries. In 1930, then modern ventilation equipment elimated that health hazard from the quarry workplace.

Brusa was the creator of one of Hope Cemetery’s most striking monuments, the stone known as the “Bored Angel,” also known as the “Sitting Angel”. Near life-sized, she sits, resting, between columns, her legs crossed, head balanced on her chin, wings flowing to the back of the stone. her look is pensive, thoughtful, perhaps bored as some suggest. We can’t help wondering what, or who, she is waiting for. or remembering.

Just as the monument are unique, so too are the numerous mausoleums “museum worthy.” All are fashioned of that hard gray granite, the angles sharp and precise, the columns immaculately rounded, the stained glass windows impeccably fashioned, and the bas reliefs, sometimes in bronze, the equal of what might be found in any world class museum.

Rock of Ages and Barre’s granite quarries lie southeast of Barre, Vermont (I-89, exit 7), and the Granite Sculptures of Hope Cemetery are set across a rolling hillside just off the main road in downtown Barr. The perfect time to view this outdoor memorial sculpture garden is in the autumn, on a fall foliage vacation tour, when nature bathes the hillsides in colors, a fitting backdrop for the vibrant work of these Barre stonecutters.

The best (or most intriguing) of Hope Cemetery: 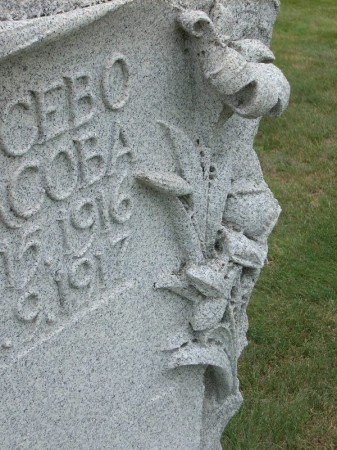 Facebook
Twitter
Pinterest
Email
Print
Previous articleConcert to benefit “Walk Now For Autism”
Next articleDon’t be fooled by “troop withdrawal” agreement; we are still in for the long haul