Apart from J.K. Rowling’s Harry Potter phenomenon, the most challenged books of the 21st century (2000-2005) include a number of books taught as classic and “relevant” books in terms of content and history.

All but three of these books also were in the top 10 of the most challenged books of the 1990s. The ALA reports there were more than 3,000 attempts to remove books from schools and public libraries between 2000 and 2005. Challenges are defined as formal, written complaints filed with a library or school requesting that materials be removed because of content or appropriateness. 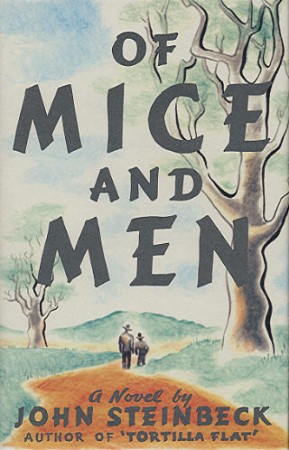 I scan this perpetually developing list, and am continually confounded by the titles that emerge. Start with John Steinbeck’s Nobel Prize-winning Of Mice and Men. Of Mice and Men is a novella written by Nobel Prize-winning author John Steinbeck. Published in 1937, it tells the tragic story of George Milton and Lennie Small, two displaced migrant ranch workers in Great Depression-era California.

Based on Steinbeck’s own experiences as a bindle stiff in the 1920s (before the arrival of the Okies he would vividly describe in The Grapes of Wrath), the title is taken from Robert Burns’s poem, To a Mouse, which is often quoted as: “The best-laid plans of mice and men/often go awry,” though the phrase in the original Scots of the poem is “The best laid schemes o’ mice an’ men/Gang aft agley.”

Required reading in many high schools, Of Mice and Men has been a frequent target of censors for what some consider offensive and vulgar language. Yes in high school, reading this text, along with The Pearl and Cannery Row, charted a new course in reading and in the understanding of the human condition.

Maya Angelou’s I Know Why The Caged Bird Sings is a story about the pressures of living in a thoroughly racist society and how profoundly such a society shapes the character of an individual and the dynamics of a family.  It is a story of how one girl strived to surmount such pressures in rural Arkansas. Her story is representative of many African-Americans in the South at that time.