The story and photo galleries are a combined effort by Turner McCullough Jr., Bill Larson and Christine Piesyk.

The Clean Dude. the Baby Bugs. The Bone Crushers. Pinky and the Brains. Peay Brains. Those were just a few of 70 teams competing in the non-traditional and decidedly non-varsity Mud Bowl 2008 at Austin Peay State University on October 2.

Shortly after 4 p.m., as the warming sun sank softly behind the treeline, male, female and co-ed teams gathered at the intramural field for a whole new kind of volleyball: a game played in a foot deep pool of slick, non-spa-like mud, courtesy of the APSU staff and the local Fire Department. The balance of this hilarious, fun-filled afternoon was consumed by rotating volleyball teams playing in a contained mud bowl. The operative word here being M-U-D! MUD! ’nuff said!

It all starts here! With mud. An area roughly 30′ X 30′ was surrounded by bales of hay, lined with a heavy plastic sheeting, filled with dirt that was subsequently soaked with water by local firefighters. While the mud looked black at the onset, as it gradually smeared itself over the players, it was a lovely shade of pale clay brown, giving a whole new meaning the concept of “mudbath.” 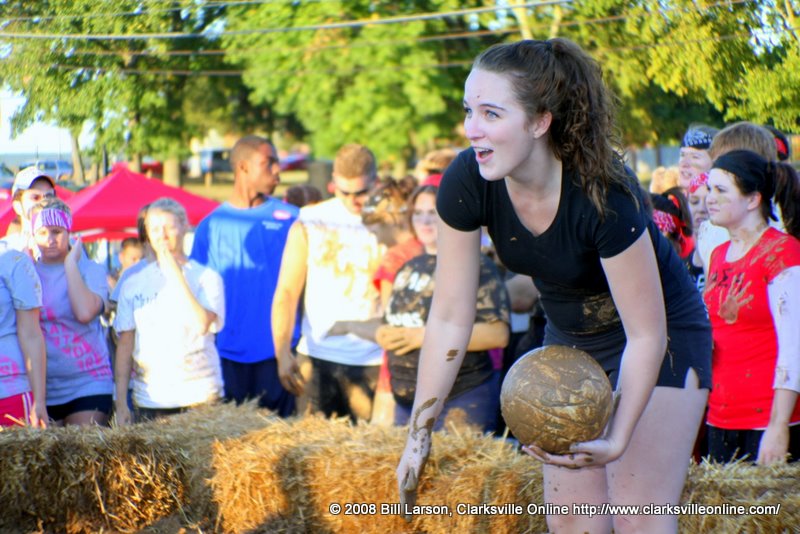 Just entering the intramural field was a challenge, since the ground was soaking wet, sucking at the bottom of shoes and sandals of visitors. A few bales of hay stacked against the fence were used for viewer seating, rendered moot by the surging crowds that surrounded the mud pool as the cry rang out: Let the games begin!

It was tame at first, with the female teams having first crack at the
net, gingerly stepping in, one sinking foot at a time. With each splat, the volleyball itself changed color, and the splatters of mud extended beyond the ring. By the time the first dozen rounds were completed, half the audience of players and viewers were wearing, well, mud.

Half the fun, though, were the “costumes” created by the players. One student duct-taped his sneakers to his pants with yellow tape. One team sported colorful shower caps to protect hair (only partly successful). One team of young men wore thrift store suits and ties into the arena. Many sororities opted for shorts, tank tops or T-Shirts with teams names and slogans inscribed, or the obvious muddy hand prints on various anatomical features. Use your imagination and think young.

The spit and polish ROTC team arrived in crisp pristine running suits, emerging after the fray in a condition only the manufacturers of laundry soap could appreciate. By 7 p.m., as the three hour games were winding to a close, the final teams battled it out in increasingly colder evening air and mud that began to have a chilling effect on bare feet.

For some students, it was their third year of mud wars; others were newcomers, including my own granddaughters (a freshman and a sophomore) who jumped into the fray. A few were seniors, taking one more shot at the Mud Bowl 2008  Championship. Not quite the prestige of a degree and Pomp and Circumstance, but the fun factor of this event earned high honors.

It must be said that while the Clarksville Online staff was a bit biased towards my brood (the pretty girls of  “Bone Crushers” fame), the CO  photographers and writers were not immune or protected from a pelting with mud. Even as notedwere being written, and pictures taken, mud balls and the residual rub-off from an increasingly muddy crowd rendered CO staff unfit for public exposure. At least, public exposure beyond the limits of the Intramural Field.

And there’s only more mud from here!

Browse through the following galleries for complete coverage of the Championship Mud Bowl 2008.