Stewart County officials speak up for change in Washington. Detail local impact of decisions made in nation’s capital city.

Saturday, September 27th, Nan and Jim Robertson opened their Stewart County home to host a Stewart County Democrats for Obama House Party. On the patio garden of the lovely wooded residence, Stewart County Democratic Party officials spoke of reasons everyone feels its time for a change in the way Washington does business. Local citizens are suffering under the wave of neglect and disregard that signifies the Bush Administration’s approach to government.

Jim welcomed the guests to their home and encouraged everyone to incorporate ‘green technology’ and businesses into their daily habits. He spoke of alternative energy and fuels that offer real opportunity to realign our foreign oil dependence equation and help improve the environment while giving a boost to our economy as well. 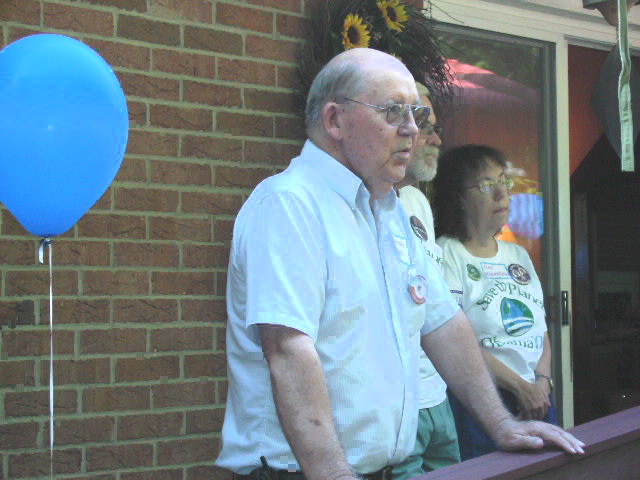 Stewart County Democratic Party President Thurston Smith stated that Federal and state government cutbacks have a disproportionate impact upon the local population. Economic realities are readily felt here and the citizens aren’t fooling themselves to these real facts. Jobs are not increasing and those that are here are not secure. Benefits are costly and inadequate. He told of how some Dover citizens, who had once confided not being willing to vote for women candidates or a candidate of a different ethnicity, have since come back to declare that they no longer feel that way and that they support and will be voting for Senator Obama in November. Stewart County is a small county, economically speaking, and the economy has soured there.

State Rep. Willie Borchert relayed several instances of rendering assistance to veterans and their families who had been caught up in the web of government indifference and disregard. Be it local, state or federal, government owes its very existence to meeting the needs of the people. Yet that government has turned a deaf ear to the cries from the American people. Veterans see their support systems whittled away, underfunded and simply denied and ask what are they supposed to do now? He cited several cases where Tennesseans had appealed to him for assistance when their veteran family members had been abused by the veterans health care system or administration. Overbilling veterans and local officials pursuing negligent enforcement of lapsed regulations are not aspects of a caring government. Federal withdrawal of education funding can have a disastrous effect on a small town like Dover. Callous disregard for the needs of our veterans runs counter to the American ideal and the promise made to every military service member. Funding ‘sweetheart’ contracts to insider companies while denying care to wounded soldiers and veterans and neglecting our infrastructure is not the American way. Borchert ended his talk by quoting a man he admitted he seldom agreed with, Allen Greenspan, “The only reason we’re in Iraq is because we’ve got an oil president and an oil vice president, and they work for Hailburton.” 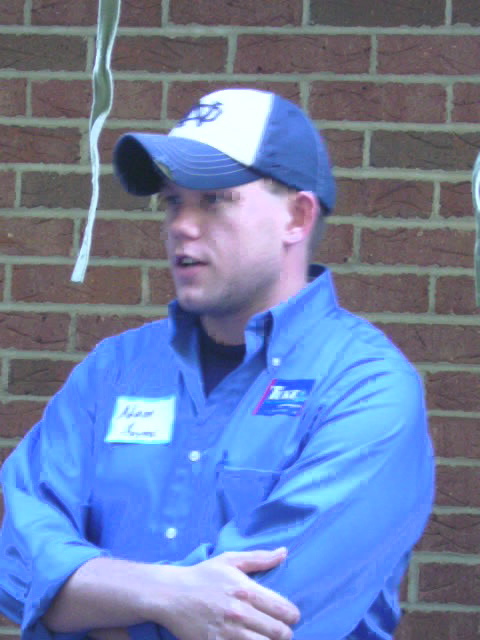 Adam Haynes, from Clarksville, next addressed the gathering, speaking for two candidates on the November ballot, Bob Tuke and Tim Barnes. He reminded everyone that change is needed beyond more than the White House. Tennessee needs a change in senate representation as well. Bob Tuke is that change. He urged the crowd to cite how Lamar Alexander has helped Dover and Stewart County in his tenure as U.S. Senator. “That silence is reason for you to support Bob Tuke and have a voice that will speak and work for more than just Knoxville, Oak Ridge and East Tennessee.”

Adam also spoke of the turmoil surrounding the state senate District 22 race. He declared, “We now have a candidate in Tim Barnes. The attempts to subvert and corrupt the election process have been addressed and the established rules and regulations have been enacted. Rather than denying citizens their vote, the process worked to protect those very votes against those who sought to manipulate and defeat them. In Tim Barnes, the district will find a candidate who, first and foremost, seeks to serve the people. Tim has no hidden agenda, no personal ambition to use this position to rise to higher office. He is committed to supporting the Democratic Party, working in a truly bipartisan manner and pass legislation to benefit the people of Tennessee.

Rep. Borchert reminded the gathering that during the past 18 months, when the state legislature failed to pass the state budget because of Senate Republican opposition, every day the state senate was in extended session cost Tennessee taxpayers an additional $50,000 dollars. Senator Kurita supported the Republicans’ agenda, not the Democratic Party, not legislation to benefit her constituents.

Terry McMoore thanked the Robertson’s for hosting the House Party and sharing their home. He thanked all the speakers and the gathered visitors for coming. He also thanked Jim and Nan for the catered refreshments spread out in the kitchen, encouraging everyone to help themselves. He complimented the beauty of Stewart county and the wonders he had found in Dover. He ended saying that Montgomery county needs to follow Stewart County’s lead in being an Obama County.