Advertising affects our collective psyche in interesting ways. We frequently relate to it, and when we do, we embrace it and make it our own. This is the case with the Budweiser Clydesdales. The public has developed a love for this symbol of Anheuser-Busch, and Budweiser Beer. Indeed Clarksville Tennessee was proud to host a visit by these beautiful animals yesterday. During the visit they drew a crowd of hundreds to Historic Downtown Clarksville to see this iconic team pull that highly polished red wagon down Franklin Street. 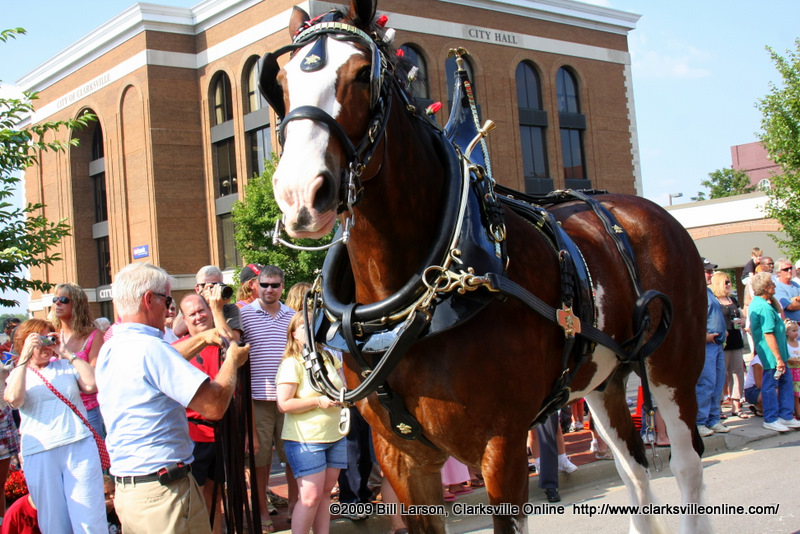 The first commercial featuring these distinct horses aired in 1967 with “A King of Beers”. The company has continued to use them as an effective marketing tool over the years with memorable Super Bowl commercials. Today the Clydesdales have become a national icon of their own right.

The Budweiser Clydesdales were featured in a non-promotional spot which was aired a single time to honor the lives lost on September 11th 2001.

Farmers living in the 19th century along the banks of the River Clyde in Lanarkshire, Scotland, bred the Great Flemish Horse, the forerunner of the Clydesdale. These first draft horses pulled loads of more than 1 ton at a walking speed of five miles per hour. Soon their reputation spread beyond the Scottish borders.

In the mid-1800s, Canadians of Scottish descent brought the first Clydesdales to the United States where the draft horses resumed their existence on farms. Today, the Clydesdales are used primarily for breeding and show.

The Budweiser Clydesdales have been the symbol of Anheuser-Busch for more than 75 years. They were formally introduced on April 7, 1933, to celebrate the repeal of Prohibition for beer. August A. Busch Jr. and Adolphus Busch III. presented a hitch of horses to their father to celebrate the day. To their father’s delight, the hitch thundered down Pestalozzi Street carrying the first case of post-Prohibition beer from the St. Louis brewery.

To qualify for one of the hitches, a Budweiser Clydesdale must be a gelding at least four years of age. He must stand 72 inches, or 6 feet, at the shoulder when fully mature; weigh between 1,800 and 2,300 pounds; be bay in color; and have four white stocking feet, a blaze of white on the face and a black mane and tail.

The Budweiser Clydesdales also may be viewed at Grant’s Farm in St. Louis and at the following Anheuser-Busch theme parks: Busch Gardens in Williamsburg, Va., and Tampa, Fla., and at the SeaWorld theme parks in Orlando, Fla.; San Diego, Calif.; and San Antonio, Texas.

On March 30, 1950, in commemoration of the opening of the Newark Brewery, a Dalmatian was introduced as the Budweiser Clydesdales’ mascot. Now, a Dalmatian travels with each of the Clydesdale hitches.