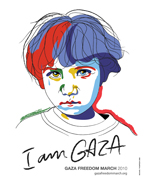 Joshua Brollier, a Northeast High school graduate now living in Chicago, will spend his Christmas vacation in the Gaza Strip, participating in the Gaza Freedom March along with Alice Walker and score of other notables.

Departing from Cairo, Egypt, Brollier and more than 1,000 international activists will caravan into Gaza to witness the devastation from last year’s Israeli invasion. On Dec. 31, they will join a projected 50,000 Palestinians in a non-violent march from Northern Gaza to the Erez/Israeli border to call for the border to open. “We are moved by the tremendous response to this march and are heartened that the global community has not forgotten us,” said Haidar Eid, a member of the Organizing Committee inside Gaza.

On the Israeli side of the Erez border Palestinians and Israelis will also be rallying to urge the Israeli government to open the border. “As a believer in the shared dignity and common humanity of all people, I cannot sit idly by while my government sends $3.5 billion a year in military aid to support Israeli policies that lead to the needless suffering, death and displacement of innocent children in Gaza” says Brollier.

Marking the one-year anniversary of the December 2008 Israeli invasion that left more than 1,400 Palestinians and 13 Israelis dead, the Gaza Freedom March is a grassroots global response to the inaction on the part of world leaders and institutions. “I have written my representatives, I have visited their offices in DC and Chicago- all with no response,” says Brollier. “Some more concrete action had to be taken.”

Also marching will be families of three generations; doctors; lawyers; diplomats; 70 students; an interfaith group that includes rabbis, priests and imams; a women’s delegation; a veterans group; and Palestinians born overseas who have never seen their families in Gaza.

The Gaza Freedom March, which will take place in Gaza on Dec. 31, was conceived in the spirit of Mahatma Gandhi, Nelson Mandela and other nonviolent resistance movements worldwide. The march will gather people from all over the world to march—hand in hand—with the people of Gaza to demand that the Israelis open the borders. “We can’t wait on the Obamas of the world who suggest building peace through endless war, we’ve got to come together and forge a new path ourselves,” says Brollier.