HomeOpinionResidents plan to fight the development of a new quarry off of...
Opinion

Update: On April 22, 2010, A representative from The Rogers Group admitted to an Oakland Hills resident that called on behalf of the Stop The Quarry movement the plot outlined in the satellite photo IS one of the two sites they are considering in the Todd County!

I was called from a neighbor a couple of days ago about a problem that might be arising that will affect all the homes off Exit 1 around the Trenton/Tylertown Roads.  She went to Kentucky yesterday to get a plat of where this Quarry will be built. It is shocking how close it is to our subdivisions on the North side of Interstate 24!

Below I have placed a copy of the plat, so you can see if it will affect your area.  We understand that this is being built right inside the KY line but they will be using Trenton and Tylertown Road to get to the Hemlock. Not to mention the blasts that will shake all of our homes! 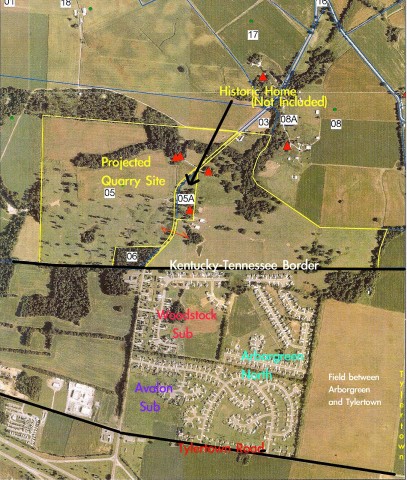 The information below was taken from the new web site which is attempting to fight the quarry, I have been given permission to quote what has been brought to the surface.

The Rogers Group based in Nashville, TN has shown an interest in developing a rock quarry in the Todd County area.  They are the company interested in the tract of land in question (below). The Rogers Group is deciding between two locations and hopes to acquire the quarry location in order to supply the Hemlock plant with the quarried limestone. (Tylertown Road would be the most direct route of delivery.)

Apparently, core samples have been taken and some surveying has been done in preparation for the development of a quarry.  However, on a positive note, no mining permit has been applied for with the state of Kentucky.

Kentucky does not have zoning restrictions – meaning there is no barrier between development and the state.  No planning commission, no re-zoning red tape.  Companies applying for a mining permit in the state of Kentucky DO have to submit a public notice to the most heavily circulated newspaper within a 50-mile radius of the intended mining site.  This is, of course, the Kentucky New Era based in Hopkinsville, would be the appropriate publication.

We need to contact them RELENTLESSLY voicing our opposition to their potential quarry before it legally becomes our newest neighbor!

We need the support of Clarksville neighbors not affected to stand in the gap for the homeowners who can’t be here due to be deployed.  Will you help us take a stand?

Channel 4 News came to Clarksville and did a piece on this developing story.

To view updated information about this developing story please visit STOP the Quarry!

If you know a resident that is deployed, stand in the gap for them! Please forward this to everyone you know to help us stop something that could hurt our economy and to educate others on what is going on right outside our back doors!

Thea Longhttp://www.diariesofafruitcake.com/
As an Assistant Loan Officer for VA Mortgage Center and a retired REALTOR® with Coldwell Banker Conroy, Marable & Holleman, Thea has been investing in Real Estate for 12 years now. She has been a member of the Chamber of Commerce since 2007. In her spare time, she sings the National Anthem for Chamber events, military events and sporting events, including the Nashville Predators opening season in 2007/2008, and the Nascar Qualification at the Atlanta Speedway 2008. She is currently Ft. Campbell, KY Operation Rising Star 2009. Thea Long, previously Agnew,  is no stranger to Clarksville, TN. Raised in a military family, she graduated from Northeast High School and all three of her children are attending and graduating from her alma mater.  Her hobbies include writing, reading, research, marketing & design, blogging, sports and exercising.
RELATED ARTICLES
Opinion