HomeEventsComedy on the Cumberland to return July 20th!
Events

Comedy on the Cumberland to return July 20th!

On Tuesday July 20th, at 7:00pm the Roxy Regional Theatre will host some of the areas funniest comedians who will perform as part of the “Comedy on the Cumberland,” charity event. The proceeds from the event will go to benefit The Clarksville-Montgomery County Chapter of the American Red Cross. Comedy on the Cumberland is the brainchild of Hank Bonecutter, general manager of WJZM 1400 AM radio station, and a comedian.

Proceeds from the July 20th show will go to benefit the Clarksville chapter of the American Red Cross, with proceeds going directly to the local chapter. “The great flood of 2010 not only devastated Clarksville, it also devastated the Red Cross facility on Riverside drive”, said Bonecutter, “While the flood waters have receded, during the flooding the local chapter of the Red Cross put a tremendous amount of their resources into our community, and they are still out there on the front lines helping families in need. So it was a no-brainer for us to do something to help them out, and so our next show is going to be for them”.

“The success of our first event was overwhelming. The sold out crowd loved every minute of it. The sponsors were extremely happy at the turn out and the publicity generated by the campaign” said Bonecutter.

The first Comedy on the Cumberland show held in April raised over six thousand dollars for Project F.U.E.L, and helped bring more awareness to their cause of feeding needy children in the school system.

Appearing at the July 20th event will be Brian Bates, Brian E Kiley, Chad Riden, and Clarksville’s native son Jim Gossett. “These guys are very funny, each has their own unique style, and Clarksville is going to love them”, said Bonecutter, “We’re very excited to welcome Jim Gossett back to his hometown, the place where he began his career.”

You can pick up tickets at the main branch of F&M bank in Historic Downtown Clarksville, and at the Roxy Theater box office. A limited number of tickets are available for this event, so be sure to purchase your tickets as soon as possible. Tickets are $40.00 for an individual, or $75.00 a couple, and the price of the tickets are tax deductible as a donation to the Red Cross.

The first Comedy on the Cumberland sold out a full two weeks ahead its show time, so don’t delay, get your tickets now!

F&M bank, Wendy’s of Clarksville, and Wyatt Johnson (Buick GMC Hyundai Subaru Mazda)  are the primary sponsors for this event, with Clarksville Online, Discover Clarksville, Ad One and Clarksville’s Best Buys, along with CDE Lightband are serving as the media partners. “All of our partners agreed to support this effort without hesitation”, said Bonecutter, “We just couldn’t do it without them”. Both John McDonald and Tom Thayer from the Roxy Regional Theatre are very supportive of this effort, offering the use of their theatre as the venue for this charity benefit. 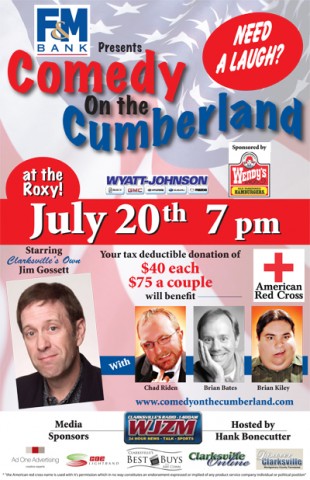