Two 101st Soldiers killed by IED device while on patrol

Fort Campbell, KY – Two 101st Airborne Division Soldiers were killed August 28th, when their unit was attacked with an improvised explosive device while on patrol in Babur, Afghanistan. 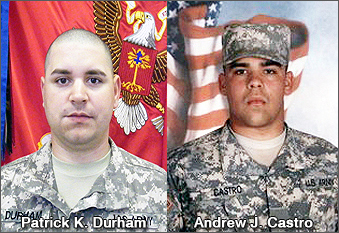 Castro is survived by his father, Hector Castro of Winnetka, CA, and his mother, Carmen Roman of Westlake Village, CA.

A memorial service will be held for the fallen in Afghanistan. Fort Campbell also holds a monthly Eagle Remembrance Ceremony. The next ceremony will be held September 8th at 4:00pm.