Nashville, TN – Austin Peay State University women’s basketball team let another halftime slip away, but for the second consecutive day they rallied in the closing minutes to secure a 78-72 victory against Eastern Illinois, Thursday, in the Ohio Valley Conference Women’s Basketball Championship’s quarterfinal round.

Fourth-seeded Eastern Illinois (18-12) made 7-of-8 from the field during that APSU drought. Kelsey Wyss scored eight points during the burst including back-to-back three-point field goals that pushed the EIU lead to eight points, 61-53, with 10:56 remaining. 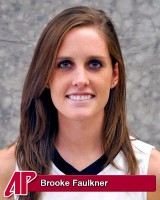 But the Panthers lead would grow no larger as the two teams traded baskets over the next five minutes. Austin Peay would only gain control of the game’s momentum with a critical flurry of activity with 4:38 remaining.

With Austin Peay trailing, 68-64, at the 4:38 mark, senior Brooke Faulkner scored a jumper following an APSU offensive rebound. As her basket went through the net, EIU’s Ta’Kenya Nixon was called for a foul, placing senior Darcie Warner at the free-throw line.  Warner did not make the front end of a one-and-one situation, but senior Dalila Thomas secured the offensive rebound and called timeout, giving APSU another possession. 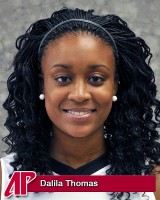 On its second possession of the flurry, sophomore Meghan Bussabarger missed a layup but grabbed her own rebound and was fouled, sending her to the line where she made both free throws and tied the game, 68-68, with 3:59 left. Eastern Illinois tied the game once more, 70-70, with 2:13 left, but Austin Peay scored the game’s next seven points to secure the victory.

The first half was an entertaining affair with the teams exchanging the lead four times. Austin Peay led by eight points, 16-8, just 4:23 into the contest as it made six of its first eight field goals, including four three-pointers. Faulkner made the Lady Govs first two three pointers, junior Whitney Hanley chipped in a three pointer before Thomas and junior Jasmine Rayner each added a basket. Freshman Nicole Olszewski ended the game-opening run with a three-point field goal.

Eastern Illinois battled back and gained the lead, 24-21, just prior to the period’s halfway point on Mariah King’s conventional three-point play. The Panthers would maintain their advantage over the next five minutes.

Austin Peay used a 14-5 run over the period’s final 5:47 to regain the lead and Thomas provided the exclamation point on the run. Following an Eastern Illinois timeout, the Panthers set up a three-point try for Wyss only to find her guarded by Thomas who blocked the shot. Warner picked up the loose ball and passed ahead to Thomas who executed a 360-degree dribbling turn before laying the ball in with two seconds remaining, giving APSU its eight-point halftime margin.

Nixon led Eastern Illinois with 27 points on 10-of-18 field-goal shooting and 7-of-8 free-throw shooting. Wyss added 14 points and seven rebounds while King chipped in 12 points.