Austin Peay (8-7) converted just once in 14 chances with a runner in scoring position and left 14 men on base in the loss. The Govs stranded a runner at third base four times in the contest.

Tennessee (15-2) started the game with second baseman Khayyan Norfork’s leadoff home run to grab the early lead. The Volunteers extended the lead to 3-0 with a pair of runs – on designated hitter Ethan Bennett’s double – in the third inning. Tennessee would add runs in the fourth an insurance run in the eighth as it never trailed in the contest.

Austin Peay broke through on the scoreboard courtesy center fielder Michael Blanchard’s solo home run in the third – his first this season. The Govs would go on to load the bases with two outs, but could not capitalize and they trailed 3-1 after three.

The Govs scored runs in the fourth and seventh innings, each time taking advantage of a Volunteers error – they committed a season-high four in the game – and closed to 4-3 in the eighth on right fielder Rolando Gautier’s RBI single.

APSU starter Alex Belew (1-2) was charged with the loss after allowing three runs (two earned) on five hits over 2.2 innings. The Govs beleaguered relief corps, which allowed 11 earned runs in 6.1 innings over three games  at Arkansas State – held Tennessee to two runs over the final 6.1 innings.

Designated hitter Cody Hudson went 3-for-4 to lead the Govs 10-hit effort. Gautier extended his hit streak to 14 games with a 2-for-4, one RBI outing. 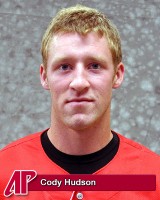 Tennessee starter Rob Catapano (2-0) picked up the victory after allowing one run over three innings. Closer Matt Ramsey earned his season’s second save as he struck out the side in order in the ninth.

Austin Peay begins a seven-game road trip with a three-game series at Illinois State – beginning with a 3:00pm, Friday contest.