The Peay Pairings Party is an open viewing party for Austin Peay fans, students and alumni, giving them an opportunity to meet, greet and watch the NCAA Baseball Championship selection show with the Ohio Valley Conference regular-season and tournament champions. The selection show begins at 11:30am (CT), Monday on ESPN. 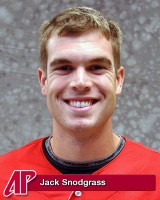 Senior starter Jack Snodgrass was named the Tournament’s “Most Valuable Player” after a career-best 11-strikeout performance in Friday’s 4-1 victory against Jacksonville State.