HomeSportsStark reality is Govs have little experience beyond veteran pair of wide...
Sports

Clarksville, TN – When Devin Stark stepped onto the football field for his first college game at Illinois State in Week 3 of 2009, he had little more than a week of practice after an NCAA Clearinghouse issue finally was cleared up.

“At one point in that game, I remember looking at (wide receiver) Coach (Marcus) Gildersleeve and saying ‘he really doesn’t know what he is doing out, does he?’ It was unfair we had to put him in that situation, but we had injury and other issues and we were forced to play him. He has come so far since then.”

In fact, turn the clock forward two years later the Memphis native is the focal point of Austin Peay’s offense. The junior was the wide receiver corps’ leading receiver a year ago with a modest 19 catches, including two TD grabs.

“I can’t say enough about Devin,” Christophel said. “He is one of those guys we have to find a way to get the ball into his hands-he is one of our playmakers. He is someone I really think could be a formidable player in the OVC.”

On the other side will be senior Scott Thomas, who was second among wide receivers a year ago with 18 grabs. With the Govs shorthanded at quarterback in the spring, Thomas, a former prep quarterback, gave Jake Ryan a breather in the spring at the position. Thinking like a quarterback again should do nothing but help Thomas and his relationship with Ryan.

“Scott is just a good football player,” Christophel said. “He is another one of our playmakers.”

Junior Robert Lemon, who joined the club a year ago, had 11 catches while sophomore Kamron Johnson tallied three. In other words, behind Stark and Thomas the Govs have little experience. 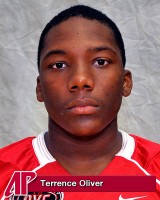 Sophomore Terrence Oliver gained some experience a year ago, but didn’t catch a pass, while Tee Howell, who played as a safety in 2010, returned this spring to the position for which he was recruited. Walk on junior Lavendor Jeffreys also showed promise in the spring.

“Terrence Oliver got some opportunities last year and should be much more ready to contribute this year, but I also am really anxious to see how Tee Howell responds,” Christophel said. “When Tee gets the ball in his hands, things happen.”

In addition, the Govs added a multitude of young receivers in recruiting, like Jamaar Embry, Darryl Clack, Anthony Woodard, Hunter Branch and Tremond Robinson. They all will get looks in preseason and some will get first-year opportunities.

“I really like our young guys coming in,” Christophel said. “They have come in and showed us something already.”