Bowling Green, KY – It certainly is not how Anthony Bradley had it planned to play in his first NCAA Regional, but the Austin Peay State University sophomore golfer has had time to regroup and focus on this weekend’s competition, Thursday-Saturday, at The Club of Olde Stone.

Bradley, the Ivybridge, Devon, England native, is participating in the NCAA Regional as an individual on the par-72, 7,248-yard course. He gained the invitation after capturing medalist honors at the Ohio Valley Conference championship at Greystone Golf Club in Dickson, TN  in late April.

Bradley was intent on being part of a five-man Governors team playing in the event.  Unfortunately, it came apart on the final hole for APSU and Bradley in the OVC tournament. In fact, as the Govs lost by one stroke to Jacksonville State, it left the Govs shocked, in particular, Bradley, who hit his tee shot out of bounds on No. 18. It resulted in a double bogey.

Despite the struggles on No. 18, Bradley still walked away from the OVC tourney with an individual three-stroke victory and the NCAA tourney invite. 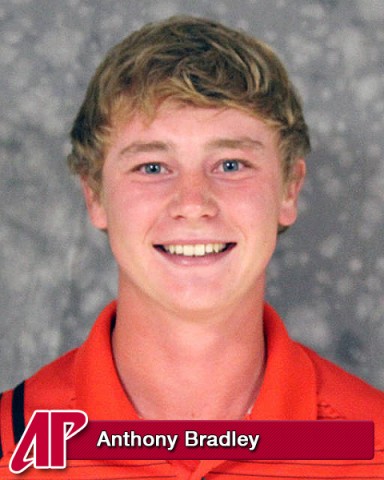 “He was definitely kind of stunned after the final round of the OVC,” APSU coach Kirk Kayden said. “He wanted the team to make it and not himself. It seems like the past week or so, though, he has put that behind him and focused on doing well and representing Austin Peay well at this regional. He has been focused on his game and working on it.

“The guys (teammates) are going to support him there for representing them in this regional.”

The Club at Olde Stone opened in Spring 2006 and it features a multitude of terrain, ranging from flood plain (Holes 2-7) to dramatic higher elevations. Olde Stone’s is distinguished by its playing conditions: bent-grass greens, tees and fairways.

“It’s definitely going to be a good challenge,” Kayden said. “Olde Stone is a great golf course. It is a PGA Tour-style golf course. Anthony is a good ball striker from tee to green and I think that will help him.

“Obviously, me being there three years ago I can provide him some insight on some the holes and to be in correct positions. Definitely, I think (this course) works to his advantage with the strength of his game being off the tee and hitting a lot of greens. That will be helpful for him in that situation.”

Bradley is just the third Gov to play in the NCAA tourney as an individual. Craig Rudolph played in the 1987 tournament while Grant Leaver played in the 2008 regional in Chattanooga.

During Wednesday’s practice round, Bradley will be paired with the region’s other four individuals-Missouri’s Jace Long, and Emilio Cuartero, Louisville’s Justin Dorward and Vanderbilt’s Adam Hofmann. Bradley previously has played in threesomes with all but Cuatero. Then it will be onto tourney competition on Thursday. He will tee off 9:40am, that day.

“I think it is a tremendous opportunity for him,” Kayden said. “You are playing against the top college players in the country this week. It is going to be a huge experience for him, especially with him just being a sophomore. It is a big-time tournament-it is one of biggest amateur tournaments-it’s the NCAA.

“You get the feel of a big tournament when you drive in. The course is roped off. You are hitting Titleist Pro V1 golf balls on the range. There are electronic scoreboards up. You have a scorer at all times. There is something all the time that gives you the feeling of a major tournament. This is something that Anthony will never forget, but also something he is going to learn from.”