Brentwood, TN – Larry Schmidt, an Austin Peay State University alum who worked at the The All State, The Leaf-Chronicle and The Paducah Sun, has been bestowed with the Ohio Valley Conference Media Lifetime Achievement Award, presented to a media member who formerly covered the OVC.

Meanwhile, Mike Parris, “Voice of the Gamecocks” for Jacksonville State University, has been named the winner of the 2011-12 OVC Media Award given to a media member currently covering an OVC beat. 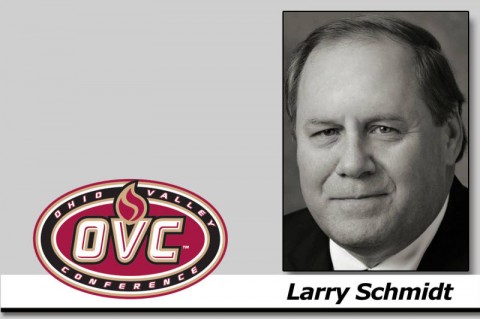 The awards were established in 2010 as a way to recognize the media members who provide publicity for the Conference, its member institutions and intercollegiate athletics, perform their jobs in a fair, consistent and accurate manner, provide all-around coverage for a variety of sports and demonstrate the ability to go above and beyond their normal beat or job description.

Schmidt started covering the OVC in 1975 when he was the sports editor of The All State (the Austin Peay student newspaper). He was there for the first game in the Dunn Center and covered what may have been the most talented APSU men’s basketball team, which lost in the OVC title game to Middle Tennessee. Schmidt’s work played a major role in Austin Peay establishing an Athletics Hall of Fame.

Having grown up in Clarksville (his dad was director of Austin Peay bands), he challenged the University and its athletic department when he wrote a column stating it was time for APSU to have an Athletic Hall of Fame. That idea took off, the Hall of Fame was started in 1977 and he was asked to serve on the initial Hall of Fame selection committee.

Schmidt began his professional career at The Leaf-Chronicle in 1977 and by 1979 was named the APSU beat writer, a position he held until 1981. He then was hired as the Assistant Sports Editor at the Paducah Sun and spent seven years there as the Murray State beat writer. During that stay, he along with several members of the media, started the OVC Media Association. He was named the first president and the task primarily was to name All-OVC teams in football and basketball.

The votes were gathered from the membership, which included both print and electronic media, as well as the school’s sports information directors. While at the Sun, he covered the Frank Beamer Era as well as covering one of Murray State’s biggest wins in the NCAA Men’s Basketball Tournament when it upset Jim Valvano’s North Carolina State team and then lost to eventual national champion Kansas on Danny Manning’s last-second basket.

In 1988 Schmidt left Paducah to become the executive director of the Kentucky Section of the PGA and the Kentucky Golf Association. There he was involved in the negotiations with Valhalla Golf Club to lure the PGA Championship to Louisville. The PGA of America eventually purchased the golf course which has now hosted both the PGA Championship and the Ryder Cup matches.

He returned to the newspaper business in 1995 as sports editor of The Leaf-Chronicle, covering Austin Peay teams in the NCAA basketball and baseball championships and  was one of only a few who saw Govs legend Bubba Wells play every game in his college career. Wells left Austin Peay as its all-time leading scorer, one of the greatest players in OVC history and is now a member of the APSU Hall of Fame that Larry helped establish—and is now once again an entrusted selection committee member. Schmidt also served as color commentator on the Governors Sports Network while handling the APSU newspaper beat.

Schmidt left the media profession in 1999, although he continued to handle color duties for home Governors basketball games, and currently works at Legends Bank in Clarksville.

“I am certainly humbled by this recognition,” Schmidt said. “I want to thank the student athletes, coaching staffs and support personnel who helped me tell the stories from Austin Peay and Murray State and, most of all, for all the friends I made along the way. I do appreciate the validation by the Ohio Valley Conference of a career that was a pleasure to come to work every day.”

“The OVC has a lot of great stories to tell and we are fortunate to have an outstanding group of media covering our schools, which was evident in the great candidates we had for the awards this year,” said Kyle Schwartz, OVC Assistant Commissioner for Media Relations. “It is great to have an award that recognizes media members who have made significant contributions in covering the OVC and its member institutions.”

Over his 29-plus years of broadcasting, Parris has called some of the most historic and memorable games in Jacksonville State athletics history. He has called four Jacksonville State national title games – football (1992), basketball (1985) and baseball (1990, 1991), plus other noteworthy contests. Most recently, his call of Jacksonville State’s 49-48 double overtime road win at Ole Miss in the 2010 football season opener was broadcast all over the country, and was featured as the lead-in to ESPN’s SportsCenter and was also featured on ESPN’s College Game Day.

In addition to being the “Voice of the Gamecocks” Parris serves as the Assistant Athletic Director for Marketing and Broadcasting at Jacksonville State University.

“I’m very humbled, honored and surprised,” said Parris. “It is always nice to be recognized by your peers, especially in a league that has so many talented members of the media. Our sports information staff here – Greg (Seitz), Josh (Underwood) and Tony (Schmidt) – make my job easy, as do the sports information staffs at every other school in the conference. Our coaches are very accommodating and a pleasure to work with. I’m fortunate to be able to do something that I love to do, especially at a place that I hold so close to my heart. This a great honor.”

“Mike does a tremendous job on our radio network and is very deserving of this honor,” said Greg Seitz, Senior Associate AD/Sports Information Director at Jax State. “He is always very professional and has had the ability to pick just the right words to describe some of the Gamecocks’ most historic and memorable games over the last 30 years.”

The OVC Media Awards are determined in a nomination process and vote that included the media relations staffs at OVC member institutions as well as the Conference office. Winners are presented their awards in the fall during to be determined athletic contests on the campus of the school whose beat they cover/have covered.