Lieutenant General Hubert “Hugh” G. Smith (U.S Army, Ret.) opened the event, held at F&M Bank by saying, “Our next State Senator will need to be a strong advocate for veterans, and no one has been more supportive or better understands the needs of veterans and their families than someone who has served in the foxhole with them.  For this reason, I am proud to be one of Mark’s Co-Chairs of his veterans committee.  We are proud not only to support Mark, but we intend to do all we can to help others learn why Mark Green will be such an outstanding State Senator for Tennessee.” 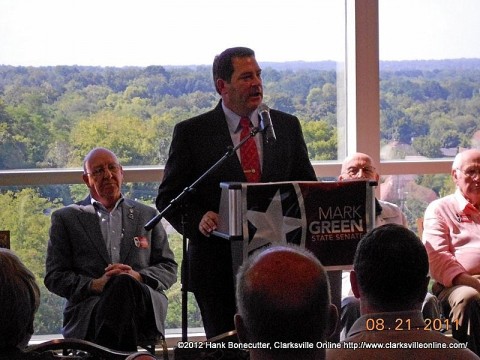 “Mark Green has worked tirelessly in our community through the years in support of our military and on veterans’ issues. He’s one of us,” Croziers said.

Green spoke to his concerns about support for military families, and support for the soldier who fights for the freedoms we all enjoy today.  He was also humbled at the servicemen who have shown him support.

“I am honored and grateful to have the support of these true Tennessee heroes and patriots” Green said, referring to the veterans at today’s event.

Green was joined by his wife “Camie” at today’s event.  The Greens have two children, Mitchell and Alexa.  Green is the President and CEO of Align MD, an emergency department, management and staffing company based in Clarksville.  Mark Green is most noted for his book, “A Night with Saddam,”, which details the night Saddam Hussein was pulled from a hole in the ground near the Iraqi town of Adwar.  Dr. Green was the chief medical officer for that operation.

Hank Bonecutterhttp://www.clarksvillesmotorcycle.com/
Hank Bonecutter is a retired broadcaster and media consultant based in Clarksville, Tennessee. His career includes stints at WKDA/WKDF and WKQB Rock 106FM, WLAC-AM in Nashville. He concluded his career as owner/talk show host at WJZM-AM in Clarksville. Currently the President of Bonehead Promotions, he's an advertising consultant and media strategist. An avid motorcyclist, Hank blogs about his travels exclusively at www.clarksvillemotorcycle.com and www.clarksvilleonline.com You can follow Hank on on Facebook at https://www.facebook.com/dodgintheroadkill/, on Twitter at https://twitter.com/?lang=en, and Instagram https://www.instagram.com/dodgetheroadkill/?hl=en
RELATED ARTICLES
Politics