Clarksville, TN – A joint effort between Clarksville Police Department and the Montgomery County Sheriff’s Office has put a bank robbery suspect behind bars.

Police have been working around the clock to identify and locate the Bank of America robbery suspect. The pictures and video from the bank robbery were distributed through law enforcement and media channels less than an hour after the robbery occurred. 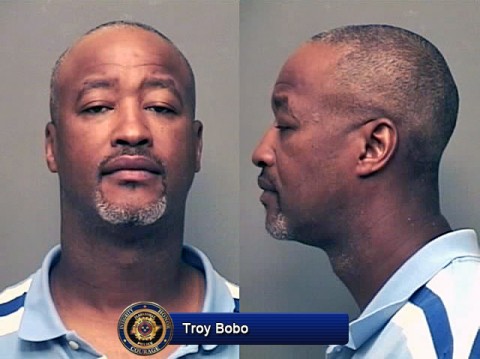 There were several suspects tentatively identified shortly after the robbery occurred. But, a night shift officer, Brian Coghill, narrowed the search down when he viewed surveillance footage from the bank and pointed Clarksville Police Department investigators toward Troy Anthony Bobo.

Investigators from the Montgomery County Sheriff’s Office also concurred that Bobo was a viable suspect.

On October 3rd, 2012, around 3:15pm, a be on the lookout notice was disseminated through law enforcement channels for Bobo’s vehicle.

Around 5:30pm, Sgt Jimmy Brown, MCSO spotted and stopped the vehicle along with several other deputies at the Dollar General on 2030 Woodlawn Road. The suspect was not inside of the vehicle, but a black knit cap and a pair of sunglasses that matched the items worn by the suspect were found in the back seat of the vehicle.

In the meantime, Clarksville Police Department detectives were able to obtain additional confirmation that Troy Anthony Bobo was the man in the photos robbing the bank.

Through a coordinated effort between CPD and MCSO, the Sheriff’s Office Emergency Services Unit surrounded a 3460 Lylewood Road residence where Bobo lived while a search and arrest warrant were being obtained.

While the house was surrounded by law enforcement, Troy Bobo jumped out of the second story window of the house sustaining non-life threatening injuries. He was taken into custody and transported to the hospital for medical clearance prior to being booked into the Montgomery County Jail.

Once released from the hospital, Troy Bobo will be booked into the Montgomery County Jail.

Troy Anthony Bobo has an extensive out of state criminal history involving robberies and other violent crimes.

For more on the story, see: Clarksville Police reports Bank of America at 1811 Madison Street Robbed this Afternoon