HomeNewsClarksvillians turn out in droves for Black Friday deals
News

Clarksvillians turn out in droves for Black Friday deals

Clarksville, TN – In the traditional closing to the Thanksgiving holiday, thousands of people left their homes on Thanksgiving evening to stand out in the cold waiting for the chance to participate in Black Friday. Retailers across the country offer some of the best deals of the year to shoppers eager to begin the Christmas purchases.

Shaquana Harmon was waiting at the entrance to Governor Square Mall with her sisters and cousins. They were hoping to find some deals on some new outfits from Victoria’s Secret and Old Navy. They arrived at the mall at around 8:00pm on Thanksgiving day for the midnight opening. “We were already out and about and had stopped at Walmart, and so we decided to come on over to the mall afterwards.” They were the 2nd group to arrive at the main entrance with the other arriving shortly before at around 7:30 PM.

“It’s exciting and suspenseful standing and waiting outside in the lines to get into the stores,” said another Black Friday shopper. “Sometimes it feels as if the store personnel are taunting us as they walk by and glance at the people standing in line outside,” she joked.

When the doors opened the mall was promptly jam-packed with people. As I entered thousands of people were walking up and down the corridors as they moved from store to store. Many were wearing reindeer antlers to take part in a special promotion where Mall Elves would select people wearing antlers from the crowd to give them the $200 gift card.

Old Navy was a popular destination. That evening. As I walked the crowded aisles happy shoppers were hunting for items in their sizes. Many of the items were priced at $20 and under.

At Parks Belk’s, I think every inch of the store was covered in shoppers. Many were trying on shoes, while others were browsing the racks looking for that special item for someone they love.

The food court was open and people were taking advantage of the opportunity to grab a bite to eat is a waited for the crowds in the stores to settle down. A DJ was playing music at a stage to keep everyone entertained. As I walked away PSY’s song Gangnam Style came on, and one couple started dancing along with the music as they walked towards the food court.

A little bit further down at the 3 Wisemen of Bethlehem booth Michael Sababa was selling the ultimate in Christmas Items, olive wood carvings from Bethlehem and Jerusalem. “It is the Christian community in Israel who handcrafted the items I’m selling,” he said. “I am hoping that this Christmas season will be very good for us. Not for me alone, but for the hard working families in Bethlehem who put their heart and soul into these carvings..”

One of the items he was selling was a olive wood necklace with a cross. The cross had a small circular area covered with clear glass or plastic and contained soil from the holy land. Other items included handcarved nativity scenes that would be perfectly at home under your Christmas tree. If you stop by the mall. Be sure to check them out. They are wonderful!

After I left the mall I headed to Best Buy. The line stretched from the front door, down the side of the building next to the mall, and almost back to the road by the Clarksville Athletic Club. 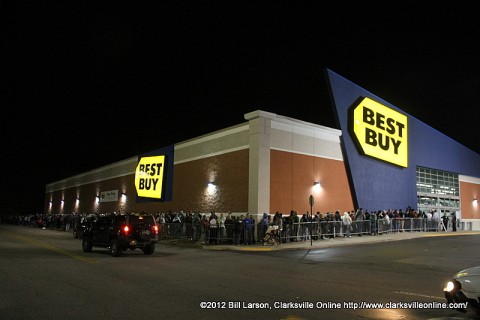 “This year we have a year under our belt opening at midnight, so we knew more what to expect. We worked hard to get the best products put on sale to make everybody happy.
We’re here to help the customers,” said Doug Griffith, the connectivity sales manager.

“We’re trying to make it the best shopping experience possible for the customers that want to come and choose us as their first stop on Black Friday,” he said. “I think that the crowds are comparable to last year, if not somewhat larger. The line started up later than they did last year, when we had people who arrived on Wednesday for the Friday sale.”

As always electronics are the hot item that people want for Christmas. This year was no exception. According to Griffith, the item that had people most excited at Best Buy on this Black Friday was the 40″ Toshiba TV “The most popular Black Friday deal this year has to be the 40inch Toshiba TV for $179.99. TV’s are always big, they are never going away.”

He continued, “Tablets are as always popular, just like they were last year. We also have a $179.99 Windows 8 laptop; again, very popular. IPads and the iPhones are very good, the iPhone4 in iPhone 4S were on special in the ad, so they are a very popular choice for many Black Friday shoppers. And also in regards to mobile phones, the Samsung Galaxy S3 phone has been a very hot item. We’ve had a lot of people calling out for the tickets on that item when we were giving them out outside. But the number one item I would say is the 40″ Toshiba TV, It’s a great deal on a great TV.”

I asked him how they deal with the influx of people and to the store when the doors are opened up for the evening. He responded, “We handle the number of people coming into the store on Black Friday, as best as we can. We try to keep the line clearly marked. People for the most part are well behaved shoppers, they know what they want, and we’re here to give them what they want. That’s why we ticket the popular items. We’re not going to just open the door and let every everyone go at it free for all. We try to keep it is controlled as possible, because we wanted to be a very, very pleasant shopping experience. All of our salespeople want the customers to go home happy remembering who it was that helped them, who rang them out.”

I asked him what tips he would give to shoppers looking to participate in Black Friday for the first time, “Patience is the best tip I can offer shoppers who are looking for deals on Black Friday. You have to have patience,” he said. “There are going to be lines, and I know that a lot of people expect that. I can’t remember the last time I took part in Black Friday a manager and not have someone come up to me to complain about something being out of stock, there not enough parking spots, the lines, and things like that. We do the best we can,” Griffith said. “Almost everyone knows what to expect these days. But remaining patient would be my number one tip.”

He continued, “There is no other day like Black Friday, it’s 5 times, 10 times, or more than what we do on our busiest day otherwise. With the hours we’re open, the influx of the customers, it blows away any other day of the year. I love it! Don’t get me wrong, we have some busy days in December too, the weekend before Christmas stuff like that. But nothing compares to Black Friday. It is an event! Absolutely even with the hours opening earlier and earlier is still an event. And that’s what the customers want, and that’s what we want.”

I caught up with Tya Jackson as she was leaving the store, and asked her about her experience. “I love it, it was long wait, but it was worth it!” She had one item in mind when she arrived at the store, a Samsung Galaxy S3 phone and she got it. “I work for AT&T, and it’s the best phone for me. I think it’s even better than Apple’s iPhone!” She hoped to spend less on Christmas this year that she had in previous years by taking advantage of all the Black Friday deals. “I’m trying to get all my Christmas shopping done tonight & tomorrow,” she said.

If you missed Black Friday, you can expect to find more deals as Christmas gets closer and closer, especially the weekend before. In the meantime, keep your eyes on the sales papers and you can still find good deals everyday. Hope to see you out there on Black Friday next year!