Bagram Airfield, Afghanistan – Many people join the armed service to get their lives on track and achieve goals they have in mind for themselves.

For Army Pvt. Jesse Ingram, D Company, 1st Battalion, 101st Combat Aviation Brigade, Task Force No Mercy, a 22-year-old native of Kendalia, Texas, that is just what he had in mind.

“I did heavy construction for four years before joining the Army,” said Ingram. “I wanted to try something new, travel and see new places. It was also the best option to get out. I was tired of being in my home town.”

Getting out of his home town was only the tip of the iceberg in terms of why he joined the Army. He also had a daughter and he needed to work on himself.

“I don’t get to see my daughter as much anymore,” said Ingram. “Being in the Army has made me more disciplined. I’m not staying out late partying and not showing up to work the next day. I think being in the Army is good. It’s making me a better father for my daughter. I took a $300.00 per month pay cut from construction, but I’m not spending money I can’t afford.” 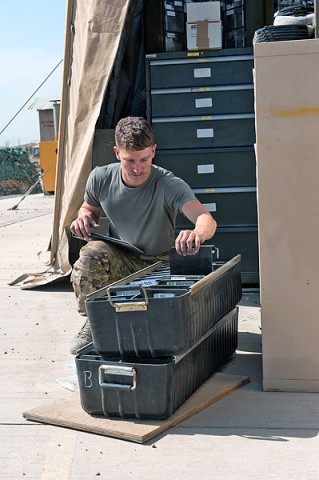 Transitioning from party animal to Soldier can be problematic for some, but for Ingram that couldn’t be further from the truth. Becoming an Apache helicopter mechanic has tapped something that has allowed him to become more than just another cog in the machine.

“Of all the new Soldiers that we’ve gotten in, he’s the one that tries the hardest,” said Army Cpl. Alex Schott, D 1-101st CAB, TF No Mercy Apache mechanic, a 22-year-old native of Sparrows Point, MD. “He has a lot of potential to succeed no matter where he chooses to go.”

Ingram is just beginning his career in the Army, and because of that, the potential that he shows gets him noticed by his chain of command. On a system as complex as the Apache, small mistakes in attention to detail can cost lives, and not just the lives of the pilots.

In Afghanistan, ground troops rely on the aerial support that the Apache is famous for; without solid maintenance, that support is impossible. Ingram has shown himself to be a private that can make or break a battle.

“He’s an outstanding Soldier,” said Staff Sgt. Jason North, D 1-101 CAB, TF No Mercy maintenance supervisor, a 34-year-old native of Crestview, FL. “He’s a good, well rounded and eager Soldier. Ingram has traits I wish everyone had. He’ll give you the shirt off his back, he really takes care of his battle buddies.”

Taking care of his fellow Soldiers is only part of the equation in a shop that works on a platform as critical as the Apache. Becoming an integrated part of the Army is equally important to being an effective Soldier.

“Ingram is still adapting to the Army ways,” said North. “I trust him to do anything as a maintenance supervisor, but he still needs mentorship as a Soldier. I want him to be as good as me and better.” 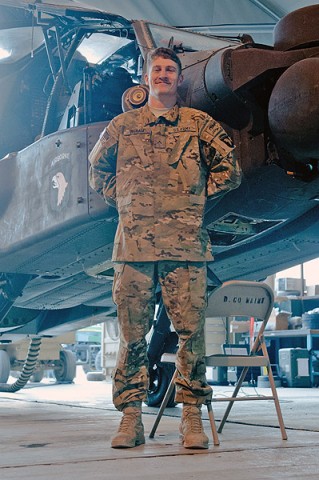 Adapting himself to the Army was one of the things that Ingram had in mind when he joined. His ambitions were simple and reflected the environment that he grew up in.

“I mostly needed discipline and temperance,” said Ingram. “I needed to have job skills for the outside. I wanted to be a mechanic. I like working with vehicles and being outside.”

A simple, strong work ethic may be what drives him from the inside. Being an Apache mechanic is anything but simple. With the dizzying array of systems and components that work together to make the Apache fly, supervisors have to have an enormous amount of faith in their Soldiers to keep things running smoothly.

“As a maintenance supervisor, I trust Ingram to do anything,” said North. “I assigned him to do the tail rotor section on the 500 hour maintenance because I have that much confidence in him. He’s just that good. My hope for him is that he’ll go all the way. I want him to go as far as he can with the Army.”

About Why We Serve

Why We Serve is an ongoing series highlighting the service and sacrifices made daily by the Soldiers, Airmen, Sailors and Marines of Regional Command-East. After more than a decade of conflict in Afghanistan, this series is dedicated to telling the service members’ story.

Since 9/11, millions of Americans have volunteered to fight on behalf of their country. Regardless of branch, rank, age, gender or ethnicity, these service members share a common bond of service. These are their stories, and this is why they serve.