Clarksville, TN – Austin Peay State University’s baseball team got out to a 7-1 lead after three innings May 17th versus SIU Edwardsville, but had to hold off the Cougars at the end for a 10-8 Ohio Valley Conference victory.

SIU Edwardsville starter Tony Schaffer would get the first two Govs hitters on a pair of groundouts, but Craig Massoni would keep the inning going with a single through the left side of the Cougars infield.

That would bring up Reed Harper, who blasted the first pitch he saw over the fence the left center field for his second home run of the series to give Austin Peay a 2-0 lead.

Harper would finish the game with two hits and four RBI.

The Govs would score two more times in the bottom of the second inning to double their lead to 4-0. 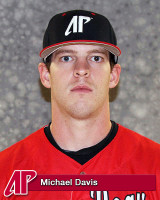 Michael Davis would start the inning by drawing a walk and move into scoring position by stealing second base.

Two outs later, Brett Carlson would drive in Davis with a double, while scoring himself on a single by Rolando Gautier.

Davis and Carlson had two hits each.

The Cougars (16-34, 10-19 OVC) would get on the board in the top of the third, getting their first two hits of the game against Govs starter Casey Delgado.

Matt Highland would open the inning with a double to left field and score an out later on a single up the middle by Nick Lombardo to cut the Govs lead to 4-1.

After scoring two runs in each of the first two innings, Austin Peay would break the game open with four runs in the bottom of the third inning to go up 8-1.

Massoni would get the inning going with his 14th home run of the season out over the left center field fence.

Massoni, who leads the OVC in batting average had three hits on the day.

The final run of the inning would come in on a single by Carlson, scoring Matt Wollenzin — who had singled — to make it 8-1.

SIU Edwardsville would respond with two runs in the top of the fourth.

Skyler Geissinger get things started with a two-out single and moved to third on a single by Devin Caldwell.

That would bring up Matt Highland, who recorded the Cougars third straight hit, driving on both Geissinger and Caldwell to cut the Govs lead back to 8-3.

The Cougars would keep their offensive surge going in the top of the fifth, scoring four runs to cut the Govs lead down to one run, 8-7.

Lombardo drew a walk to start the inning and moved to second on a single by Travis Becherer.

Jacob Stewart would follow with a single, scoring Lombardo, with James Vazquez following with a double to score Becherer with the second run of the inning.

Stewart would score on a sacrifice fly by Joel Greatting, while Vazquez closed out the Cougars scoring in the inning by coming in on a wild pitch by Delgado.

Austin Peay would respond in the bottom of the inning by scoring two runs, to go up 10-7, on a two-out single by Reed, driving in Riner and Carlson – who had reached on a single and a hit by pitch respectively.

The score would remain that way until the top of the ninth, when the Cougars score a run on Govs closer Tyler Rogers for the 10-8 final.

Delgado was the winning pitcher, improving to 8-2 on the season while Rogers picked up his NCAA leading 20th save.

The two teams will close out the three-game OVC series – and the regular season – May 18th, starting at noon at Raymond C. Hand Park.