Nashville, TN – Tennessee Department of Transportation contract crews will completely close I-440 eastbound from the I-65 junction in Nashville to the I-24 junction, including the on and off ramps at Nolensville Road, in order to perform concrete repairs this weekend. 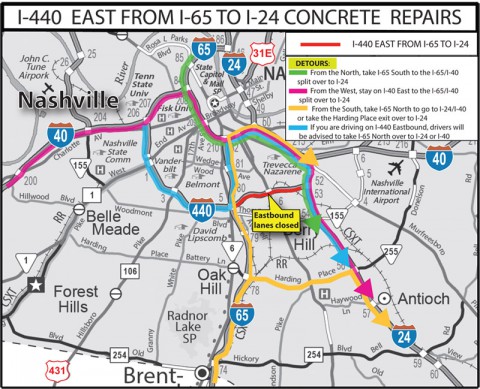 The repairs are part of a $9.7 million project to widen this stretch of I-440 Eastbound.  A total of ten weekend closures will allow the concrete work to be completed on an accelerated schedule.

Otherwise, repairs would require lane closures over a period of several months. During the weekend closures, crews will jackhammer and remove large sections of deteriorating concrete as much as a foot deep. Once the new concrete is poured, it will have to harden for several hours.

The travel lanes will then be re-striped before reopening to traffic.

The next eight interstate closures are tentatively planned for the following weekends:

*All work is weather dependent and will be rescheduled in the event of rain or severe weather.

** There will be no construction or lane closures during Labor Day holiday weekend and during the weekend of the Tennessee Titans’ first pre-season game on August 24th and regular season games during September.

Detours are as follows:

More than 106,000 vehicles travel the 7.66 mile I-440 corridor each day. The interstate connector was completed in 1987. The current improvement project is tentatively scheduled to be complete in November 2013.

TDOT will use its overhead Dynamic Message Signs to direct motorists around the closure. Drivers are advised to be alert and follow the posted directions. Law enforcement officers will be on-site in the work zone to provide traffic control as the work is being completed.

TDOT also asks drivers to use caution, reduce their speed and be alert to changing traffic conditions in work zones across the state.

Android and iPhone users can download TDOT’s SmartWay Mobile App to assist them in navigating Tennessee highways.  The app provides up-to-the-minute customized traffic information and enables the user to access TDOT’s SmartWay cameras, messages displayed on overhead Dynamic Message Signs, and information on construction related lane closures and incidents on interstates and state routes. The TDOT SmartWay App is free and available for download in the Apple App Store and Play Store for Android.

As always, drivers are reminded to use all motorist information tools wisely and Know Before You Go! by checking travel conditions before leaving for their destination. Drivers should never tweet, text or talk on a cell phone while behind the wheel.