Clarksville, TN – If there was ever an example of hard work paying off, Austin Peay State University men’s basketball player Serigne Mboup maybe the best illustration of that point the past couple of weeks, as the sophomore forward/center has stepped up his game as the Ohio Valley Conference part of the Governors schedule looms on the horizon.

Mboup, a native of Dakar, Senegal, had a slow start to his season for the Govs through their first 10 games of the season working his way up the team’s depth chart. 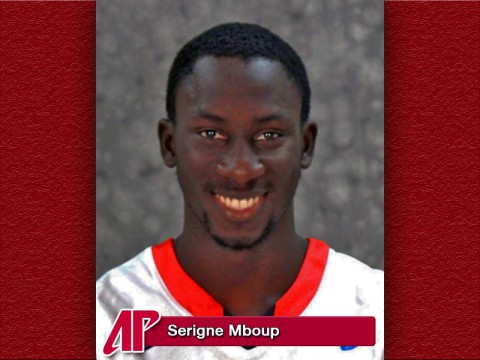 Appearing in eight of the first 10 games, Mboup was only averaging 1.8 points and 1.1 rebounds per game, while averaging only 5.9 minutes per appearance.

“At the beginning (of the season) I wasn’t playing a lot,” Mboup said. “But every time I got a chance to prove myself I just did what I can do best and that’s bringing energy and going hard and do whatever I could to bring something to the table. Be one of the pieces.

“I just keep working hard every day and go out and give my maximum to help the team win. I really focus on rebounding and defense and try to bring energy to the team, because having good energy is important for the team to keep going and push through for the whole 40 minutes.”

But after not playing in the Liberty University game, the lanky 6-foot-7 former soccer player arguably had his best game of the season — up to that point — versus Vanderbilt University in recording six rebounds, scoring two points, while recording an assist and a blocked shot.

“I think Serigne has shown improvement over the last two or three weeks and he’s playing hard and that the big thing,” Austin Peay coach Dave Loos said. “We keep telling him it starts with effort and he’s putting out a real good effort out there.

But he’s been productive too and he’s getting things done. He’s rebounding; he’s defending pretty good and getting some buckets – mostly from his hustle.”

And the number keep getting better since the Vanderbilt game, as Mboop is averaging six points and 5.3 rebounds over his last three games – including scoring 10 points in the Govs last contest at East Tennessee State University.

“I think the East Tennessee game he played particurly well,” Loos said. “He was active inside and also made some good passes. Good high low passes.

“He did get into a little bit of a hurry at the end and turned it over one time, but he’s been more active and attacking the basket. He’s looking to score more now than he was earlier this season.”

The resent success has led him to move up the Governors depth chart.

“He’s kind of moved into the first spot off the bench on the interior in the four or five spot and he has earned it,” Loos said. “It wasn’t so much a matter of someone else doing something wrong, as much as it was him doing things right and I think he’s starting to build some confidence too.”

But along with the growing confidence, Mboop gives a lot of credit to the coaching staff for standing behind him.

“The coaches give me a lot of confidence and they’ve really helped me out and showed me that if I work hard I would be able to get more minutes,” he said. “That’s what they tell everybody ‘work hard and do what we need you to do’ if you’re going to be good.

“It’s all about winning and they put the players out on the floor that they think can help the team, so you have to work hard.”

Mboop and the Govs return home to play Dalton State at the Dunn Center on December 30th at 7:00pm, while OVC play begins January 2nd in a home game versus Tennessee Martin.

Chris Austinhttp://www.clarksvillesportsnetwork.com
Chris Austin is a graduate of Clarksville High School and Austin Peay State University. Chris is a former Head Softball Coach for APSU, and assistant basketball coach for CHS. Chris has worked at the Leaf-Chronicle, and WJZM News/Talk/Sports radio. Has also worked at the Sports Information Department at APSU, and has covered championship events for the Ohio Valley Conference and NCAA. Chris is an avid sports fan and can be found at most Austin Peay State University sports events.
RELATED ARTICLES
Education