Clarksville, TN – Junior keeper Nikki Filippone, of the Austin Peay State University women’s socer team, has been named the Copies in a Flash APSU Athlete of the Week.

Filippone was electric in two matches for the Lady Govs last weekend, shutting out Southeast Missouri and conference-leading SIU Edwardsville for two huge wins for Austin Peay. She recorded seven saves against the Redhawks and six saves against the Cougars for her season’s first two clean sheets to move the Lady Govs above .500 in OVC play. 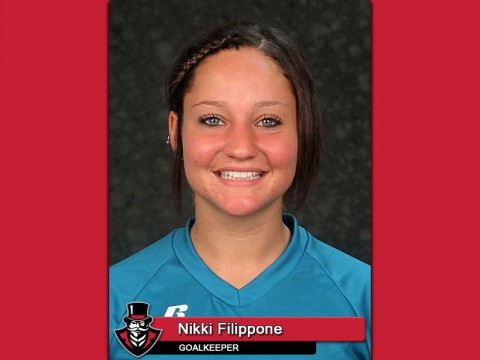 For the season, Filippone is now 3-3-0 with 56 saves and a 1.49 goals-against average. Her 0.80 GAA in 2013 was the second-best single-season mark in Austin Peay history. Her saves mark ranks sixth in the Ohio Valley Conference.

Tuesday, Filippone was named adidas®/OVC Goalkeeper of the Week, her first career weekly honor from the conference.