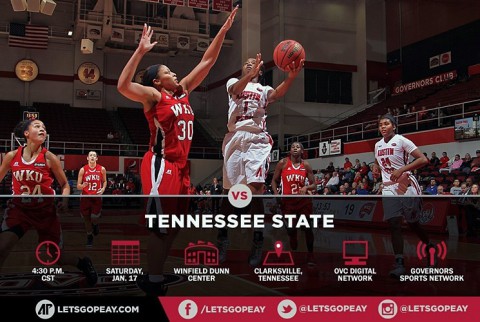 The Lady Govs moved to 3-1 in OVC action with Thursday’s 72-59 OVC home-opening win against Belmont. The victory kept Austin Peay in a tie for fourth place with Tennessee State – Saturday’s opponent.

Defense and rebounding have been the Lady Govs two pitfalls throughout the 2014-15 season and they won both battles in Thursday’s victory. Austin Peay eked out a 45-44 edge in rebounding as center Tearra Banks grabbed nine rebounds and guards Kristen Stainback and Jacey Scott both hit the boards for six rebounds each.

Austin Peay will face a Tennessee State squad that handed it a devastating 96-61 loss last season – the Lady Govs worst loss in 21 years. In retrospect, that loss sent the 2013-14 season into a tailspin as the first loss of a season-ending six-game losing streak that dropped APSU out of the league’s tournament field.

Tennessee State is off to a 3-1 start in league play after a 76-72 victory at Murray State, Thursday. The Lady Tigers opened league play with wins against Southeast Missouri and Eastern Illinois before falling at SIU Edwardsville one week ago.

However, the Lady Tigers present a different problem at the offensive end of the court, where they are averaging a league-best 16.3 offensive rebounds per game.

The senior duo of Briana Morrow and Chelsea Hudson have been particularly hard to stop under the offensive glass. Morrow leads the OVC with 3.8 offensive rebounds per game, pushing her to eighth in the league’s individual rebounding race (7.1 rpg).