A 6-3, 180-pound guard from St. Louis (St Mary’s High School), Robinson played a key role in the Governors 56-52 win Saturday at Eastern Illinois. After three straight starts, he came off the bench against the Panthers to help boost the club’s lagging production from reserves. 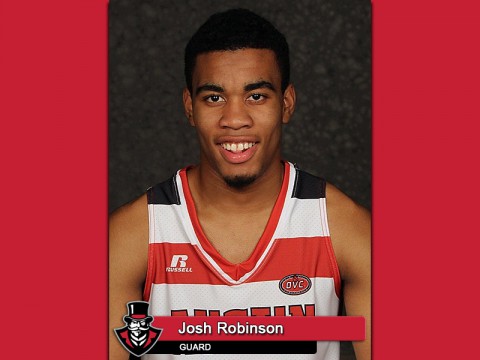 He responded with 11 points, including back-to-back second-half three pointers that culminated the Govs’ rally from a 13-point deficit to tie EIU.

With the Governors clinging to a lead in the final seconds, he hit three of four free-throw attempts that sealed the contest. Robinson also had a season-high three steals in the contest and three rebounds.

At SIU Edwardsville, Robinson scored a team-high 17 points, including a trio of three pointers, while also grabbing five rebounds in the narrow loss.

Robinson has connected for at least two three pointers in each of the Govs’ OVC games and is averaging 13.2 points per game six league games. He has scored double figures in five straight contests.

This was the second time this season Robinson has earned the weekly OVC Freshman award.