Fort Campbell, KY – “Nearly all men can stand adversity, but if you want to test a man’s character, give him power,” Abraham Lincoln said.

The ceremony symbolized the empowering of 16 newly-promoted NCOs.

“The NCO induction ceremony is a celebration of the newly-promoted NCOs who have proven themselves to be worthy of the title, a noncommissioned officer, a leader of Soldiers,” said Command Sgt. Maj. Joe Burney Jr., the ceremony’s guest speaker. “Every military organization around the world would like to possess a professional NCO Corps such as ours. It is a time-honored Corps with a great history, also known as the ‘backbone’ of the Army.”

Burney stressed to the young NCOs that, while many say leadership is the most important combat multiplier, without Soldiers there is no need for leadership; so it is imperative that they make sure to take care of the Soldiers entrusted to them. 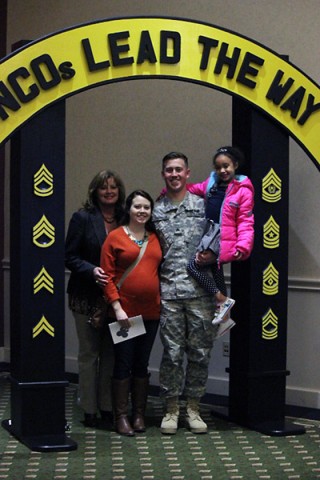 “You must lead from the front, setting the example and never, I stress this, never ask them to do anything you have not done already or will not do yourself,” Burney said. “Follow this simple principle and your Soldiers will go anywhere and accomplish any mission or task you give them.”

Burney also reminded the leaders that they are responsible for whether their Soldiers succeed or fail. The two basic leadership responsibilities are to be accountable and responsible for the Soldiers assigned to their care.

“You cannot be the type of NCO that when Soldier succeed, you take the credit, and when Soldiers fail, you blame it on them,” Burney said. “If they failed, you as the leader probably failed to provide that purpose, direction and motivation. You must be accountable for always training to standard.”

As he looked at each individual sitting before him, Burney reminded the newly inducted NCOs of one thing.

“NCO’s set the standards both ethically and morally; this is now your charge,” Burney said. “I want to congratulate you on being inducted into the Noncommissioned Officer Corp. I am proud of you, and I know that you will make us proud in the years to come.”