Clarksville, TN – It’s just a matter of days before Miss Tennessee USA 2015, Kiara Young, 25, makes her way to Baton Rouge to compete for the title of Miss USA 2015.

The 64th annual Miss USA pageant will be telecast live from the Baton Rouge River Center in Louisiana on July 12th at 8:00pm/7:00pm CDT on NBC.

Kiara is a student, NFL cheerleader, and boutique buyer. She received her BS in Biological Sciences with a concentration in Organisms, Ecology, and Biodiversity from Hampton University in 2012.

At age 17, she was the victim of a drunk driving accident. Although she faced many injuries after the accident, she was able to overcome it all through her faith and with support from her family. She is the oldest of four, the only girl, and strives to be an example for her brothers. She loves reading, mentoring, volunteering, and dancing. Whether on the sidelines or pageant stage, she takes pride in performing in front of an audience each time! 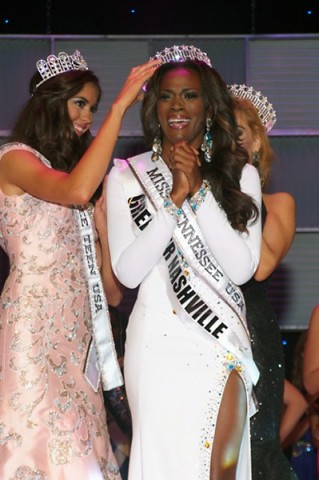 “Kiara is an excellent example of the young women we have had the honor of sending to the Miss USA Pageant to represent our state and organization,” said Pageant Director, Kim Greenwood. “She embodies poise, intelligence, class and beauty, and those qualities will take her far.”

Upon arrival in Baton Rouge, each of the 51 ladies, with representatives from all states and the District of Columbia, will be a part of a series of rigorous rehearsals, interviews and fittings. The Semi-finalists will be seen as part of the live show on NBC with each lady competing in swimwear and formal wear. The top five will complete a short question and answer segment.  The winner of the Miss USA Pageant, owned by Donald Trump, will go on to compete in the Miss Universe Pageant.

For the 16th year, Clarksville will host the Miss Tennessee USA and Miss Tennessee Teen USA Pageants. The events will take place at the Austin Peay State University Music and Mass Communications Building Concert Hall on October 2nd-4th, 2015. Tickets will go on sale in September.

Qualified applicants must be a resident of Tennessee, a single female (never married and never had a child) and a U.S. citizen. Those wishing to apply must be between 18 and 27-years-old for Miss Tennessee USA or 14 and 19-years-old for the Teen pageant as of January 1st, 2016.

Applications for the pageant can be found on www.misstennesseeusa.com under the “Apply Now” section.