Nashville, TN – Nashville Sounds utilityman Ryan Roberts has been named the Pacific Coast League’s Player of the Week for the August 3rd-9th period.

Roberts’ best effort of the week came on August 4th at the Omaha Storm Chasers, when he went 3-for-5 with four RBIs and two home runs, including a go-ahead roundtripper in the top of the 12th inning to lead Nashville to an 8-6 victory. 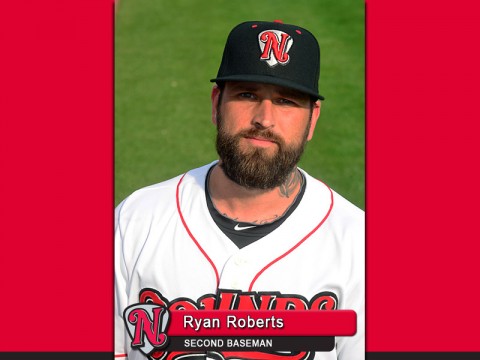 The veteran has been swinging a hot bat for the past few weeks. Roberts has a hit in 18 of his last 22 games (.326, 28-for-86) and has mashed a league-leading five home runs and the second-most total bases (29) during the month of August.

Additionally, the slugger has driven in 14 runs since July 29th, tied for most in the league.

Since making his debut with Nashville on April 26th, Roberts is tied for 4th among PCL hitters with 27 doubles and has batted .297 with nine homers and 47 RBIs in his 90 contests with the Sounds.

The versatile player has appeared at all four infield positions as well as left field and designated hitter for Nashville this season.

Roberts’ PCL award – the first weekly honor of his 13-year career — is the second accumulated by a Sounds player during the 2015 season. Barry Zito was honored as the circuit’s Pitcher of the Week for the May 25th-31st period.

Roberts and the Sounds enjoy an off day before beginning a four-game road trip in Iowa tonight. Baseball returns to First Tennessee Park on Saturday night, when Nashville hosts the El Paso Chihauhuas in the 6:35pm. opener of an eight-game homestand.

Tickets are available at www.nashvillesounds.com or by calling 615.690.HITS.