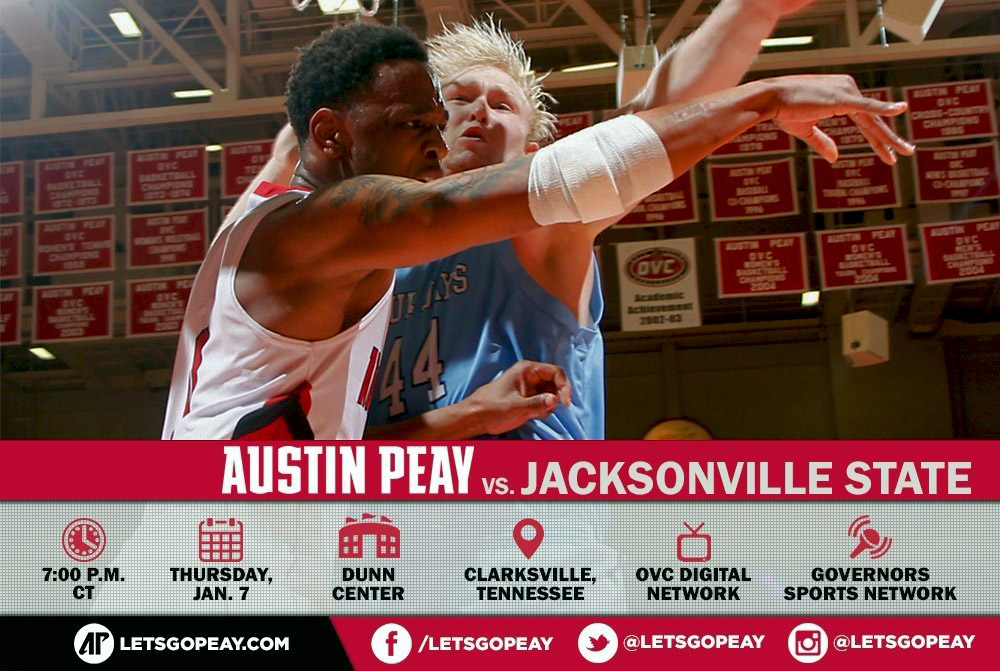 Clarksville, TN – With five days to mull over its most recent performance and an opportunity to press the reset button, Austin Peay State University men’s basketball team now will seek its first Ohio Valley Conference victory, 7:30pm, Thursday, when it plays host to Jacksonville State, in Dave Aaron Arena. 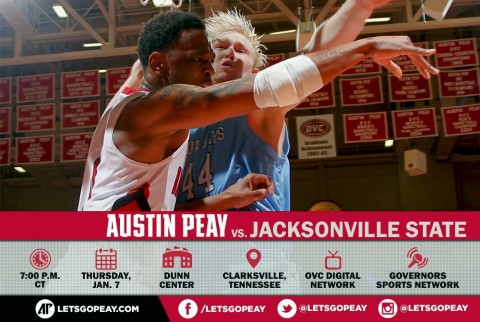 The Governors are coming off a 79-70 OVC-opening defeat against Eastern Kentucky, Saturday, a game that saw them fall behind after center Chris Horton went to the bench with foul trouble.

The Colonels never trailed after the 9:28 mark of the first half, despite repeated Governors attempts to regain momentum. APSU struggled gaining offensive consistency not just from the floor (43 percent shooting/30 percent three-point shooting) but from the free-throw line (56 percent) as well.

As a result, the Governors were unable to complete a comeback from a 14-point deficit.

The Governors did place five players in double figures in the loss. Senior forward Khalil Davis led the Govs with 16 points and Horton, despite sitting for more than 12 minutes with two first-half fouls, was able to score 15 points and grabbed 13 rebounds, 11 of the points and rebounds coming in the second half.

Junior forward Kenny Jones made it three straight games with double-figure scoring with 13 points while freshman forward Jared Savage made it two straight double-digit performances off the bench with 10 points, including a pair of second-half three pointers.

Jacksonville State comes in with a 5-12 record, including a 0-6 road record. But both marks are a little misleading as the Gamecocks have competitive road losses at Central Michigan, Virginia Tech, UAB and Alabama, the later coming in overtime. One thing the Gamecocks have the Govs don’t? An OVC win. The Gamecocks defeated last Thursday, 72-67, at home, before losing to Eastern Illinois, 75-64, in a game they led much of the way.

Guards Malcolm Drumwright (15.5 ppg) and Erik Dunham (10.0 ppg) lead the JSU scoring, although freshman wing Jared Hamilton’s play has been on the rise. He was named OVC Freshman of the Week after averaging 12.7 ppg over the last three games.

JSU utilizes basically a four-guard offense, with 6-7 forward Jeremy Watson the only Gamecock who starter who stands taller than 6-4.

This is fifth of the Govs’ six-game homestand, which concludes 6:30pm, Saturday—please note the time change from the original 7:00pm start—against Tennessee Tech.