HomeSportsUT Vols Basketball travels to Fort Worth to take on TCU Horned...
Sports

Knoxville, TN – Tennessee breaks from SEC play and closes out the month of January on Saturday when it travels to Fort Worth, Texas, to face TCU in the Vols final non-conference tilt. Game time is set for 2:00pm ET/1:00pm CT on ESPN2.

Saturday’s game was scheduled as part of the Big 12/SEC Challenge. It is the second straight year that the Vols have participated, having picked up a 65-64 victory over Kansas State in last year’s edition.

Tennessee (10-10, 3-5 SEC) is looking to finish its non-conference slate with an 8-5 record, including its first non-league road win of the season. The Vols dropped to .500 overall with a 63-57 setback at Alabama on Tuesday night.

Senior guard Kevin Punter Jr. continues to lead the Vols with a 22.9 ppg scoring average — good for second in the SEC and eighth in the country. Robert Hubbs III — a junior wing — follows Punter at 12.3 ppg and senior Armani Moore rounds out Tennessee’s double-digit scorers at 11.7 ppg.

Moore, who pulled down a team-high 11 boards in Tuscaloosa on Tuesday, is UT’s leading rebounder at 8.0.

TCU is 2-0 all-time in the Big 12/SEC Challenge, defeating both Mississippi State and Ole Miss over the last two seasons. Saturday marks just the second meeting all-time between the two programs. Tennessee trails in the series 1-0, falling to the Horned Frogs, 73-59, in 1991.

With 22.9 ppg, Vols senior point guard Kevin Punter Jr. is the nation’s eighth-leading scorer and the Capital One Impact Performer of the Week. The Vols rank 28th nationally in free-throw percentage (.742). In SEC play, that percentage increases to a league-best .821.

Saturday’s contest is TCU’s seventh men’s basketball game in Schollmaier Arena, which opened December 20th. The Horned Frogs are 3-3 in the new facility.

SEC kicks back into gear next week when the Vols play host to No. 20 Kentucky on Tuesday night at Thompson-Boling Arena. That game — the 219th meeting all-time between the Volunteers and Wildcats — tips off at 7:00pm ET/6:00pm CT and will feature an ESPN broadcast as part of Super Tuesday.

Give the Vols an 8-5 record in non-conference play this season. Give Tennessee a 12-16 all-time record against current members of the Big 12 Conference.

Give the Vols their second victory away from Knoxville this season. Tennessee previously won at Mississippi State January 16th. Make the Vols 3-2 in their last five games in the state of Texas, dating to December 17th, 2005.

The Big 12/SEC Challenge is in its third year. Tennessee is 1-0 in the event, as the Vols did not take part in the inaugural challenge in 2014. 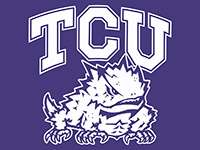 The Horned Frogs are 7-5 at home this season, including a 3-3 record at their brand new Schollmaier Arena. In Big 12 play, TCU is holding its opponents to 74.1 points per game. TCU forces 15.3 turnovers per game, which ranks 38th in the country.

TCU returned three starters from a year ago in Chris Washburn, Kenrich Williams and Karviar Shepherd. All three are team co-captains. Sophomore Malique Trent ranks third in the Big 12 and 50th nationally in steals with 1.88 steals per game.

TCU’s Michael Strickland scored 12 of his game-high 21 points in the second half, leading the Horned Frogs to a 73-59 victory over Tennessee in the semifinals of the San Juan Shootout on November 30th, 1991, in Bayamon, Puerto Rico.

Junior guard Allan Houston led the Vols with 20 points, and forward Corey Allen added 13 points on 6-of-7 shooting from the field. Allen also was UT’s leading rebounder, with eight.

The Vols led 37-35 at halftime, but TCU scored the first five points of the second half and took the lead for good (40-39) on center Reggie Smith’s three-point play.

After falling behind 56-47 with 9:30 to play, the Vols fought back to close the gap to 56-52 on a Chris Brand 3-pointer and a Gannon Goodson putback. But Tennessee could get no closer, as TCU delivered at the free-throw line down the stretch. The Frogs attempted 40 free throws on the day.

Attendance for the game was listed at 551. Wade Houston was the Tennessee head coach, and TCU was led by coach Moe Iba.

If it weren’t for Tennessee, Texas would be “North Mexico”

There can be no doubt Texas owes a great debt of gratitude for its statehood to the fierce men from Tennessee.

Before the Alamo fell, 33 Tennesseans, the largest number of defenders provided by any state — nearly four times as many as from Texas — kept Mexican General Santa Anna’s overwhelming army at bay for 13 days against unbelievable odds.

On March 6th, 1836, the brave Tennessee Volunteers and the other Alamo defenders were overrun and breathed their last.

However, the crucial days the Volunteers slowed down the Mexican army gave another Tennessean, Sam Houston, enough time to gallop through Texas raising an army to defend what would become the Lone Star State. This army defeated Santa Anna in no small part because of the contributions of Tennessee’s Volunteers.

Senior point guard Kevin Punter Jr. was 14-of-15 at the line against the Gamecocks on January 23rd and is 29-of-30 at the stripe over UT’s last four games.

Tennessee owns a 10-4 record in Coaches vs. Cancer “Suits and Sneakers” games, dating to the NABC/American Cancer Society initiative’s launch in February 2004. The Vols are 6-2 at home and 4-2 on the road when the coaching staff breaks out its fresh kicks.

The Coaches vs. Cancer mission is to increase cancer awareness and promote healthy living among students, faculty, school staff, fans and the community at large, through year-round awareness efforts, fundraising activities, and advocacy programs.