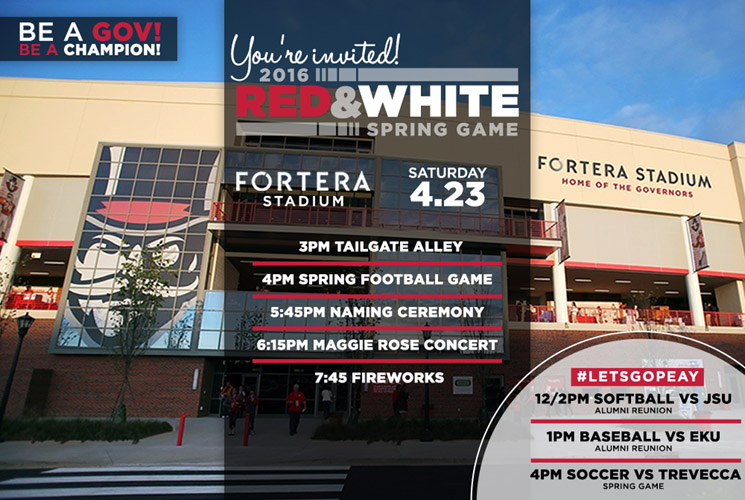 Clarksville, TN – Spring has officially been in season for nearly a month and Austin Peay State University athletics will get in on the action Saturday, April 23rd by hosting its Spring Fling, a cross-sport initiative that will culminate in the stadium naming rights celebration at Fortera Stadium.

At 5:45pm, following the Spring Game, there will be a brief ceremony as the home of Governors football officially becomes Fortera Stadium, part of a 25-year, $2.5 million partnership between APSU Athletics and Fortera Credit Union. 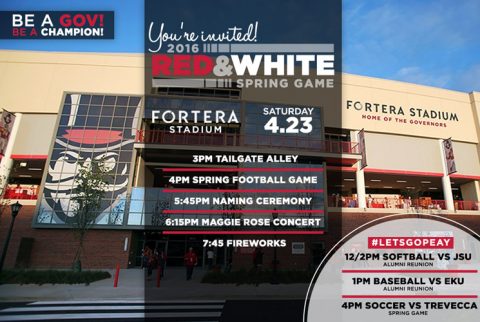 The stadium’s namesake company will sponsor a concert featuring Maggie Rose at 6:15pm and a fireworks show at 7:45pm to close out the day’s festivities.

It all begins at 11:30pm, as the Third Annual Baseball/Softball Alumni Tailgate begins on Tailgate Alley at spots 90-94 to welcome back our former baseball and softball student athletes. The reservation deadline is April 15th, with a limit of four tailgate passes per alumnus.

All alumni should RSVP at http://apsubaseball2016.eventbrite.com

For online reservations, print and show your Eventbrite ticket at the tailgate. Baseball tickets will be at Will-Call under the name of the APSU baseball alumnus making the reservation.

At noon, Austin Peay softball takes on Jacksonville State at Cheryl Holt Field. After a six-game road trip, the Govs will be happy to return to the friendly confines, which they last saw Sunday, April 10th when Savanna Oliver hit a walk-off home run against Tennessee State. Game two of the doubleheader is scheduled for a 2:00pm first pitch.

Fans with an appetite for baseball can walk across Drane Street at 1:00pm to watch the second game of Austin Peay’s series against Eastern Kentucky. Members of the 1970-71 Ohio Valley Conference Championship team will be recognized during this contest.

At 4:00pm, the annual Red-and-White Spring Game kicks off—the final event held before Governors Stadium is rechristened. It’s the first spring game under the Will Healy regime, who has installed an up-tempo offense and rigorous discipline—the first steps in the program’s resurrection. An alumni tailgate precedes the event, beginning 3:00pm on Tailgate Alley.

For those who are more futbol than football inclined, Austin Peay soccer wraps its spring campaign against Trevecca, with first kick scheduled for 4:30pm.