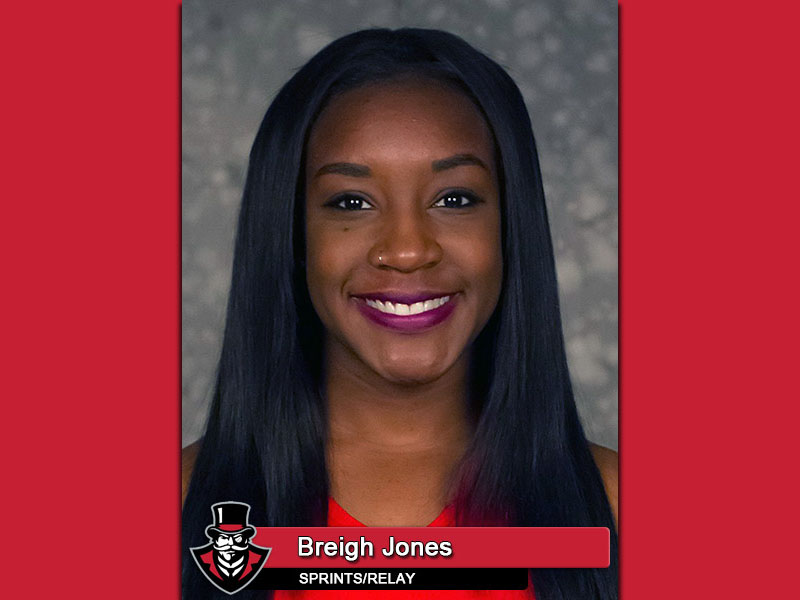 Clarksville, TN – Former Austin Peay State University, APSU track and field standout Breigh Jones has been selected as one of two Ohio Valley Conference nominees for the 2016 NCAA Woman of the Year award.

A Memphis native, Jones is one of 141 female student-athletes designated as a conference honoree, joining Belmont distance runner Hannah Wittman as an OVC nominee.  She is one of 54 Division I athletes up for the honor. 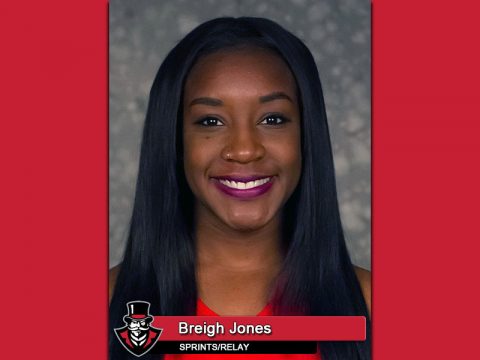 The Woman of the Year selection committee next will select the top 10 honorees in each division.

These top 30 honorees will be announced in early September.

The selection committee will then choose and announce the top nine finalists (three from each division) at the end of September. The NCAA Committee on Women’s Athletics will vote from among those nine finalists to determine the 2016 Woman of the Year.

The top 30 honorees will be recognized and the 2016 NCAA Woman of the Year will be named at the annual ceremony in Indianapolis in October.

Jones, who graduated in May with a degree in psychology after a storied Austin Peay career, is the first Governor track and field athlete to earn a Woman of the Year conference honor since Carrie Burggraf (2010). She’s just the third APSU athlete to advance this far in the nomination process since the NCAA began presenting the Woman of the Year award in 1991.

A prominent member of the Student-Athlete Advisory Committee (SAAC), Jones was Austin Peay track and field’s Scholar Athlete of the Year in 2015 and 2016, and earned two of the most prestigious individual awards Austin Peay offers—the Female Athlete of the Year honor (2015) and Austin Peay’s Legends Award (2016). Earlier this year she was awarded her first CoSIDA Academic All-District honor.

A two-time Steve Hamilton Sportsmanship Award nominee, Jones was awarded the prestigious OVC Scholar-Athlete Award—the highest individual honor an OVC student-athlete can earn. The award annually is presented each fall to three men and three women student-athletes for their accomplishments in both the classroom and athletic arena, along with their leadership qualities.

She leaves Austin Peay as one of the most decorated athletes in school history. Owner of seven Austin Peay records and 16 medals in Ohio Valley Conference competition—including five golds after earning an elusive 4x400m relay gold at the 2016 Outdoor Championships, Austin Peay’s first since 2000—Jones was a three-time NCAA East Preliminary participant in the 400m dash.

In 2013, she qualified to represent Team USA in the Junior Pan American Games, and in 2014 she became the first Governor since 2001 to advance to the NCAA