Evansville, IN – Austin Peay State University’s volleyball team ran into a red-hot Dayton squad and dropped a three-set decision (19-25, 18-25, 13-25) in its final match of the Dunn Hospitality Tournament, Saturday, at the Carson Center.

Dayton (10-0) won the first and third sets in wire-to-wire fashion.

The Flyers used 17 kills in the first set while limiting the Govs to nine kills.

The third set saw Dayton use 12 kills in an errorless attack outing (.444 attack percentage) to clinch the win.

However, Austin Peay (5-5) put the Flyers to the test in the second set, forcing nine ties and three lead changes. The Govs led as late as 12-11 and the teams were tied at 15-15. However, Dayton closed the second frame with a 10-3 run to claim the 2-0 advantage en route to the win.

Kaitlyn Teeter led the Govs with eight kills. Junior Ashley Slay chipped in seven kills and three blocks. The Govs were held to 30 kills and a .108 attack percentage in the three-set affair.

Jessica Sloan had 15 kills to pace Dayton’s 46-kill performance. The Flyers hit .396 as a team, Lauren Burns leading that effort with a .588 attack percentage thanks to 10 kills and no attack errors on 17 attacks. 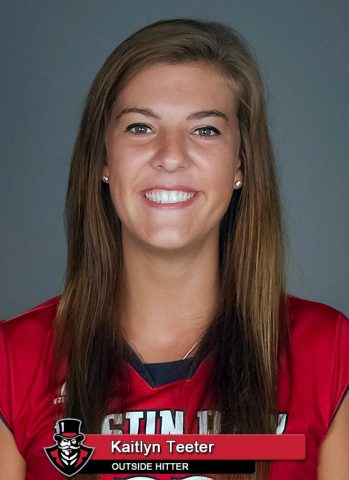 Teeter Paces Govs
Junior transfer Kaitlyn Teeter posted a team-best eight kills to wrap up her stay in Evansville. She completed the three-match tournament with a team co-leading 28 kills (2.55 per set) while also chipping in 17 digs.

Slay Steady on the Block
While Slay was unable to match her 11-block morning against Kent State, she still had a hand in all three Govs blocks against Dayton. She tied with Teeter for the team lead in kills (28) but also had 15 blocks (1.36 per set).

5-Win Start Sets Pace
Austin Peay stands 5-5 after the season’s first three weekends. It is the Governors best start since 2010 when it started 11-1 en route to its first-ever NCAA tournament appearance.

Austin Peay returns home to host another Atlantic 10 foe when Saint Louis visits for a 5:00pm, Tuesday contest at the Dunn Center.