Clarksville, TN – The Roxy Regional Theatre opens its production of “The Diary of Anne Frank” this Friday.

The play is based on the diary kept by its namesake during the two years she and her family spent in hiding from the Nazis. The Frank family was eventually apprehended and Anne died of typhus in the Bergen-Belsen concentration camp.

Her father, Otto Frank, was the family’s only survivor and had a hand in getting his daughter’s writing published. Today the diary has been published in more than 60 languages.

“It is such a powerful story, it really personalizes the tragedy of what happened to millions of people and the potential that she had,” said Clarksvillian Beth Kirby, who stars as Anne’s mother, Edith Frank. “I am really proud to be part of it.”

Nashvillian Virginia Richardson stars as Anne in the Roxy’s production.

“It is a little bit intimidating,” Richardson said of her starring role.

To better understand the young teenager who was swallowed up by the murderous Nazi machine, she did research and listened to an audio book of the diary.

“She was so creative and upbeat when people really needed it the most,” Richardson said. “So it is a little bit intimidating.” 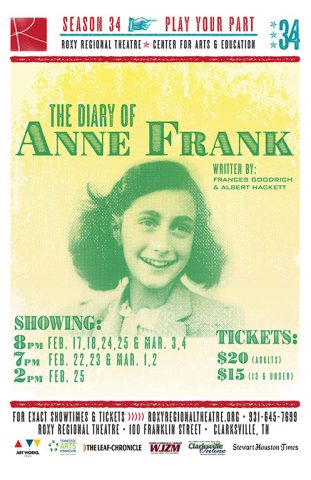 Jay Doolittle, whose home is in Knoxville, Tennessee, has been part of some 62 Roxy productions. Doolittle takes on the role of Otto Frank, which he first portrayed on the Roxy stage in 1999.

“I liken Otto to Mr. Gilbreth of Cheaper by the Dozen because he tries to protect his flock,” Doolittle said.

Doolittle said that Anne’s story of people being ostracized simply because of their religion is something that we can continue to learn from.

“Who knew that this piece would also become so relevant with what is going on in our world at the current moment?” said Ryan Bowie, executive director of the Roxy Regional Theatre.

The production of the “The Diary of Anne Frank” opens at 8:00pm Friday with pay-what-you-can night.

“All of our mainstage productions start with a pay-what-you-can night,” Bowie said. “The way it works is any tickets remaining a half-hour before curtain on opening night are available for whatever you wish to pay — with a $5.00 minimum.”

Show times for the production are 8:00pm Fridays and Saturdays and 7:00pm Wednesdays and Thursdays through March 4th. There also is a 2:00pm matinee on Saturday, February 25th. Admission is $20.00 for adults and $15.00 for children ages 13 or younger.

The Roxy Regional Theatre is a 501(c)(3) nonprofit organization dedicated to the support of the arts. It is located at 100 Franklin Street in Historic Downtown Clarksville. The box office can be reached at 931.645.7699.