Greenbelt, MD – As Hurricane Irma approached southern Florida, a NASA satellite captured a night-time image of the storm in the Florida Straits and identified where the strongest storms were occurring within Irma’s structure. NOAA’s GOES satellite provided a visible image at the time of Irma’s landfall in the Florida Keys.

As Irma moved along the coast of Cuba, the storm weakened to a Category 3 Hurricane on the Saffir-Simpson Hurricane Wind Scale.

After moving away from the northern coast of Cuba, Irma passed over waters that are warmer than 30 degrees Celsius (86 degrees Fahrenheit).

Those warm waters enabled the storm to re-strengthen from a Category 3 hurricane to a Category 4 hurricane.

On September 10th, at 3:38am EDT (0738 UTC) the Visible Infrared Imaging Radiometer Suite (VIIRS) instrument aboard NASA-NOAA’s Suomi NPP satellite captured an infrared view of Irma at night as it moved north from the northern coast of Cuba toward the Florida Keys.

The image revealed that Irma’s eye had become clear again. The image also showed the city lights in the southeastern U.S.

The VIIRS image showed the well-defined eye of Irma with strong thunderstorms around the eye which is indicative of an intense tropical system. Strongest thunderstorms with coldest cloud tops were as cold as 190.1 Kelvin (minus 83 degrees Celsius/minus 117.4 degrees Fahrenheit).

At 9:10am EDT on September 10th, Irma made landfall at Cudjoe Key in lower Florida Keys.

Irma had re-strengthened into a Category 4 hurricane and the GOES satellite image showed that the eye became clear again.

Warnings and Watches in Effect on Sunday, September 10th 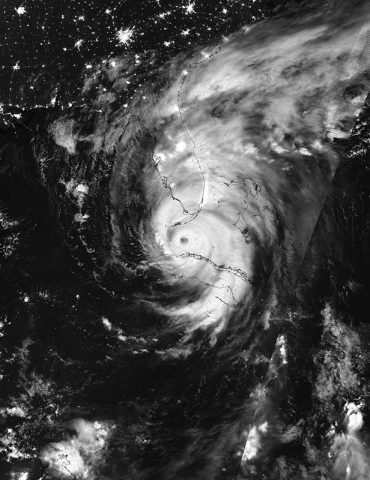 A Storm Surge Warning is in effect for south Santee River southward to Jupiter Inlet, north Miami Beach southward around the Florida peninsula to the Ochlockonee River, the Florida Keys and Tampa Bay.

Hurricane Irma at 8:00am EDT on Sunday, September 10th

The National Hurricane Center said “Irma is moving toward the north-northwest near 8 mph (13 kph), and an increase in forward speed is expected later today, with that motion continuing through Monday, September 11th.

For updates on Irma and effects of wind, storm surge and rainfall, visit the National Hurricane Center website: www.nhc.noaa.gov